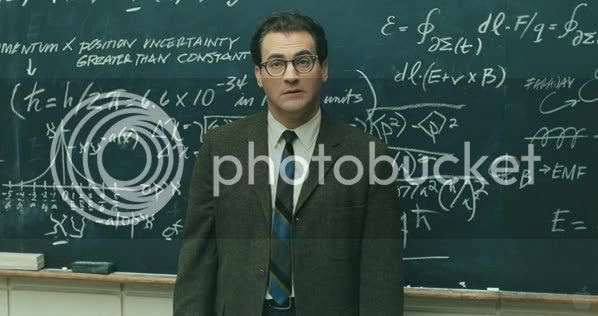 A Serious Man can be immediately placed into the permanent comedy hall of fame, but like the infamous Airplane! quip, this cup is black, and - depending on one's palate - very very bitter (so much that even some ardent Coen fans found the bleakness of tone to be one of "go fuck yourself" levels of offense). Some consider their films of late (No Country and since) to be atheistic, but my experiences find it to be a trend of strict agnosticism - perpetual doubt and scrutiny, the longing for the impossible fruit of knowledge. "Why does he make us feel the questions if he won't give us any answers?", pleads Larry Gopnik (Michael Stuhlbarg, in the third best performance of the year not nominated for an Oscar), a singularly poetic articulation of one very ultimate question. A savagely existential comedy of errors, A Serious Man grooves on Gopnik's mounting anquish, he a physics professor up for tenure whose wife suddenly leaves him for a close friend, forcing him out of the house, etc. Life punches in rapid succession, inviting biblical comparisons and anti-Semitic charges, but this series of unfortunate events is really among the most personal and empathetic work as has ever been put out by a semi-mainstream studio (the Coens have made clear the influence their youth had on the film). That it sits atop some of the most savory comedic timing since Jones and Avery ruled the world (bonus: some of the great pot scenes in movies) only deepens the all-penetrating mirror erected for our psyche; we laugh, so we may not cry. "Hashem hasn't given me shit!" screams Larry's socially challenged brother Arthur (Richard Kind), reminding us that somebody always has it worse. Key, though, is the defiant use of power: why should I tell you the end, and does that really even matter anyway? God exists in these last few by the Coens, to which they say, how great can He be if this is how things are? Lebowski, meet Gopnik.