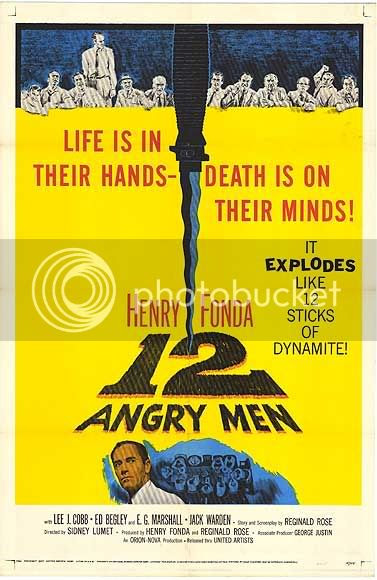 A young Spanish boy, raised in the slums, stands on trial for the murder of his father. Twelve white jurors march off to decide his fate, most of them convinced of his guilt purely on the basis of his appearance and background before facts have a chance to even enter the equation. These opening scenes of 12 Angry Men, first written in 1954 and filmed here in 1957, are exceedingly telling about the racial and economic divides in America even with fifty years of hindsight. While the film most prominently prescribes to the importance of upholding one’s democratic responsibilities as well as one’s obligation to their fellow man, the racial divides that separate the haves from the have nots is another roadblock that has refused to go away, and thus remains a hot topic suggested here. An average 90’s remake of the film hardly had to change a thing to bring the material up to the times, suggesting that as long as democracy exists and we human participants are flawed in nature, 12 Angry Men and the issues it raises will be timeless in nature.

Taking place almost entirely within the jury room, 12 Angry Man watches as eleven jurors first convinced of the suspect’s guilt are slowly won over to the side of reasonable doubt by the one man sympathetic enough to at least look over the details of the case before sending a man off to die. The twelve men (referred to by their juror number rather than name, as goes the democratic process) exist less as individual characters than as semi-exaggerated caricatures that siphon variously opposing, often clashing viewpoints. For as nicely packaged as 12 Angry Men often is, it makes no self-saluting motions to greater importance, which gives the material the much-desired breathing room it needs to reach full potency. As the most ardent believers of the suspect’s guilt refuse to be worn away by the evidence mounting up in favor of his innocence, one might sense that they exist largely as straw men for the film’s levelheaded bleeding heart to tear down. That would be the case were such stubbornness and bigotry not present in the real world, and if 12 Angry Men’s jury room acts as an unstated microcosm of the real world (or at least American society), then it’s allegorical implications hit all the right notes, even if they may be relatively oversimplified in the long run.

I seriously doubt that the triumph of truth-seeking over reckless abuse of democratic power portrayed here is what generally unfolds in the real world; for as much as 12 Angry Men reflects the many divides of society, it also exists as an idealistic vision of what democracy should be. As a political lesson, it earns the right to borderline on preachy, but as a drama, the film arguably works even better. Employing tighter framing compositions and lower-level angles as the film progresses, the sense of tension and heightened tempers in the small room escalates to near unbearable levels, punctuated by newfound inconsistencies in the testimonials as well as revelations that cast known details of the case in a new lighting. Such images as eleven of the jurors standing opposite the irrationally enraged juror number three (Lee J. Cobb) evoke a wonderful sense of humanities’ potential for good, political context notwithstanding. As a work that reflects on the common regard for one’s fellow man, it is pertinent and demonstrative.