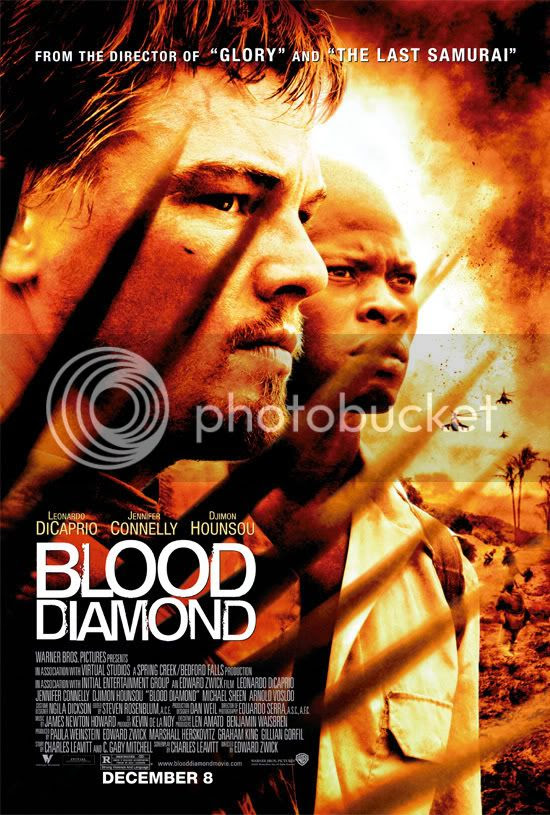 Like so many contemptuous brethren before it, Blood Diamond truly, utterly believes that it is carrying out some potentially world-changing act of goodness, should enough people see its life-changing story and heed its call. Illegal diamond exportations in African have fostered government corruption, while rebel organizations terrorize the countryside, killing and enslaving the innocent as a means of taking back their land and resources. Such is the case with Solomon Vandy (Djimon Hounsou), who barely escapes death and mutilation but is separated from his family when he is enslaved as a diamond miner for the R.U.F. (Revolutionary United Front). Enter Danny Archer (Leonardo DiCaprio) and Maddy Brown (Jennifer Connelly), he a smuggler-for-hire with detailed inside knowledge and she a journalist probing the matter. Solomon knows the whereabouts of one of the largest of the titular stones ever found; Danny wants the rock, Solomon wants his family and Maddy wants a story to take down the corrupt diamond organizations, thus forming the self-serving circle of this misbegotten road movie. Blood Diamond brings to mind the simplified treatment of worldly tragedies in the same line as Hotel Rwanda, but whereas the latter was merely watered down and overly polished, the former is outright clueless in both content and execution. Director Edward Zwick wants to challenge the foundations of bourgeois culture but his condescending exposition-action-exposition narrative structure is but pandering to removed individuals who need overt stimulation to give a shit about Africa in the first place (which doesn’t even begin to cover how the film horrifyingly turns scenes of torture and genocide into high-octane, cartoonish action sequences). Truly offensive, however, is the film’s go-nowhere result, its purported liberal ideologies untapped beyond their potential for speedy, soulless entertainment for the masses, culminating in a literal standing ovation and feel-good resolution that suggests the problem is beyond concern, thanks to our heroes.