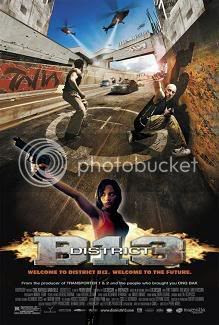 The French indie actioner District B13 serves as the much-needed cinematic antidote for this year's Running Scared. While both films use CG enhancement and fancy camerawork to create an internal sense of hyper reality, the aesthetic of Wayne Kramer’s pathetically angst-ridden flop was not unlike rolling around in broken glass, while director Pierre Morel uses his barbarous stylistics to compliment the film's rugged terrain; sight and sound meld, rather than clash, into a cohesive adrenal force. Opening with an visually intoxicating foot chase (that would be heavily mirrored – albeit in tasteful fashion – in Casino Royale), the film distills its genre components down to their bare essentials, finding time for genuine character moments amidst its mandatory fulfilling of narrative obligations, which are both sleek and without tedium. Less bombastic than the similarly to-the-point Ong-Bak, District B13 keeps its punches and bullets alive by grounding them in genuine moral issues and a kicker of political responsibility, which it incorporates as more than mere lip service. Taking place in 2010, one of the worst sections of Paris has been walled off and all but forgotten by the inept and cynical government; Leïto (David Belle), a criminal born inside the demonized district, is forever at odds with the overruling warlord Taha Bemamud (Bibi Naceri), whose gang members steal a government bomb that undercover cop Damien Tomaso (Cyril Raffaelli) is called in to defuse before it explodes, obliterating everything within the surrounding eight kilometers. Both smart and direct, District B13 is the kind of lean, mean action film most of America’s working directors only wish they could pull off.