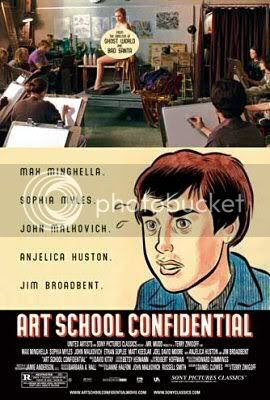 Something of a dark cousin to Spike Jonze’s brilliant Adaptation., Terry Zwigoff’s dark comedy Art School Confidential is a creation by and for artists. Chronicling the pangs of creative strife set against the impending pressures of commercial and academic success (not to mention ever adolescent’s inextinguishable, unwavering life goal to get laid), the film simultaneously champions creative desire while calling out the realm’s share of pretentious blowhards, emphasizing the distinction between truly earnest – however aesthetically “simple” – outputs, and mere superficial gimmickry. Virginal Jerome Platz (Max Minghella) is a freshman at art school, discovering friends, muses, inspirations and enemies amongst the student population, faculty body and surrounding neighbors. Competition rules the land more so than genuine creativity; Jerome’s professor Sandiford (a brilliant John Malkovich) resents artists who’ve found success painting geometric shapes – a trend he started long before it took off in popular culture – while the student body regularly praises work that truly represents the epitome of audience-pleasing mediocrity, much to Jerome’s complete exasperation. Art School Confidential is at its best when it simply explores the relationships and (very much true to life) artistic stereotypes at play, although a subplot involving a string of murders on campus allows for some of the film’s sharpest criticisms of art culture. The film is ultimately more cynical than Zwigoff’s previous Bad Santa, although it isn’t nearly as overtly hilarious as it is scathingly incisive into the bullshit that permeates so much of our culture’s pretentious outpourings. Jerome might not be as tempered in the artistic realm as many of his peers, but his efforts are as true and earnest as anyone else's, yet this hardly safeguards his work from the lions ready to tear it to shreds practically sight unseen. Similarly, one needn’t look far in film culture to see both newcomers and auteurs regularly lambasted for such bold and unrestrained works of creativity, nor in society at large for such unrestrained filleting of individuals and their work for the entertainment of the masses. Zwigoff’s film may ultimately lack a specific target for its bitter misanthropy, a fact reflective of the case that we’re all in need of a bit more damning scrutiny that we’re regularly willing to admit.