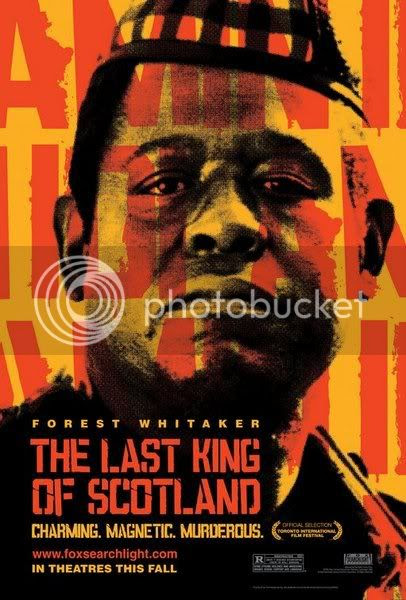 The Last King of Scotland doesn’t condescendingly suggest its African settings to be mere adventure grounds for the vagabonding white man to the same extent its naïve protagonist does, but the decision to limit its “based on a true story” narrative to the gimmicky aesthetics of a superficial political thriller brings it close to same level of offensiveness. Having just earned his doctoral degree, dissatisfied Nicholas Garrigan (James McAvoy) leaves his Scottish home for the nation of Uganda so as to lend his skills to the native population. He arrives in the midst of a coup, and, through a series of chance encounters, becomes the personal physician of the newly empowered General Idi Amin (Forest Whitaker). Amin is a menacing figure to those he disagrees with, but warms instantly to Nicholas, taking him in as his closest confidant. Enamored by the lifestyle afforded by his elite political position, Nicholas is oblivious to the corruption within the ranks, as Amin crushes his opposition across the nation (in reality, the real Amin ordered anywhere between 80,000 and 500,000 Ugandans murdered between 1971 and 1979).

In the centerpiece role (truly a supporting performance, despite his being practically guaranteed to win the Oscar for Best Actor in a Leading Role come February), Forest Whitaker is something of a marvel, although his incredible ability to abruptly shift between monstrosity and childlike playfulness is severely uncut by the script’s pervasive lack of relevance; Amin here isn't a real-world monster but a cinematic villain missing only a mustache to twirl (in a ridiculous scene of faux terror, Nicholas helps Amin pass gas). Like many other films of its ilk, The Last King of Scotland pats itself on the back for liberal do-goodery but barely addresses the effects of government corruption on its African society beyond those felt by our fictitious white protagonist, propping them up not as conflicts of great social weight but a maze from which our hero must narrowly escape (note to all wannabe filmmakers: randomly shaking your camera while incessantly zooming in and out does not a sense of tension make). The film gets points for being less obliviously exploitative than Blood Diamond and more graphically frontal than Hotel Rwanda, yet its ultimate effect is that of shallow self-congratulation.