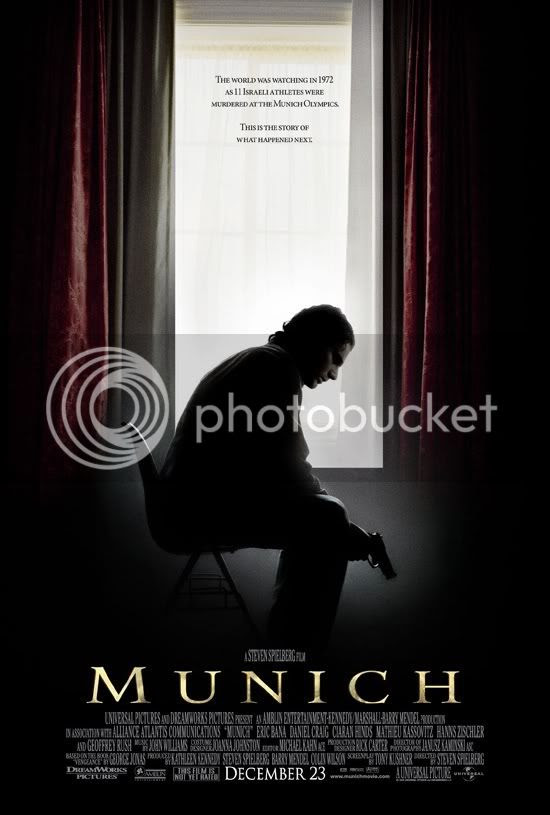 A plethora of names – the cities to host the Olympic Games prior to 1972 – fill the screen in the opening frames of Munich. This textual myriad soon fades to black to reveal the film’s title, bathed in crimson red, followed by the disclaimer, “inspired by true events.” This moment emphasizes the weight of the tragedy to take place at the supposed festivity of world peace, as well as the necessary declaration that this is art, not history. The Olympics spanning the globe, however, also suggests that Munich's story is one deeply universal in nature. The hosting cities standing in for a sampling of the entire world, Munich emerges as but one of many similar stories throughout human history that, in the end, are really about the same thing. As regards history, the film is an examination of the nature of humanity, in this case, the darker aspects of violence, revenge, and death, rather than a regurgitated depiction of events passed. Some may disagree with Spielberg’s politics, but if there’s one thing the film certainly is not, it’s simple.

A longing for home is the central core to Spielberg’s powerful dissertation. The real-world conflict between Israel and anti-Semite Arabs provides the film’s dramatic backbone from which it can occasionally deviate, so it may look closer at the gritty humanity behind the events that unfold, for both the good and the bad. One side claims the need for a home after thousands of years of persecution, the other the home they once had, pulled out from under their feet. Both sides suffer casualties from the other, and both sides see fit to reprise the latest attack from their enemy. As Spielberg expresses through one of his characters: “There is no peace at the end of this.” But to protect oneself and ones family, violence is sometimes needed, whether as a means of protection, or dissuasion. But under what circumstances, and in what quantities? In the midst of asking these very difficult questions, Munich declares family and home as that which it is most allegiant to (even if, like a good dissenting citizen, it questions Israeli policy). To quote but one of many memorable statements from Spielberg's dialogue: “A place on Earth. At last, we have a place on Earth.”

After a team of eleven Palestinian terrorists take nine Israeli athletes hostage at the 1972 Munich Olympic Games, ultimately killing them all before the eyes of the world, the Israeli Prime Minister Golda Meir (Lynn Cohen) knows that any act of reciprocation will only see more violence against their people. Yet to remain mute in the face of such a media-frantic tragedy would be to show a face of weakness. “Forget peace for now. We have to show them we’re strong.” Enter Avner (Eric Bana), an ex-soldier, Israeli-born Jew asked to lead a five-man mission to assassinate the eleven terrorists (members of the group Black September) behind the Munich massacre. He accepts the job, even with a seven-month pregnant wife waiting for him in Jerusalem. One by one, they hunt down and kill the individuals responsible for the massacre, even being well aware that those killed will have even more ruthless replacements. The pertinence of this timely issue is no coincidence, especially when one regards the simple visual statement in the final scene of the film. Can a war on terrorism be won? Or will the need eventual for non-violent dialogue be lost on those in conflict, even as the effects of vengeance become counter-productive?

In addition to deconstructing the taken-for-granted perceptions of violence and revenge, Munich also finds itself a disarming take on the relationship between the viewer and the film in it’s depiction of the assassinations to follow. Filmed with the skill of a master, they are riveting and enthralling, even as we’re horrified by man’s inhumanity to man in all its aspects. In one poignant scene, like the calm before a storm, Avner talks friendly with a Palestinian terrorist on a hotel balcony. The film declares no moral ambiguity between the “sides” shown at war, but acknowledges that even one’s enemy is almost always still human. When Avner’s team finds themselves occupying the same building as their future enemies (after an unexpected meeting and nerve-racking cease-fire), the discussions, both verbal and wordless, are illuminating. The most memorable of these is a quarrel over the radio station of choice; Steve and an equally stubborn Palestinian take turns changing the dial to their particular preference, back and forth, encapsulating the cyclical tendencies of exchanged violence and thus, their potential for sheer pointlessness.

The progression of violence and killings serve as the source of desensitization for the Israeli team members. Unsure of the reliability of his sources and employers (one of whom may be backed by the CIA), and in the midst of the deaths of several of his fellows, Avner’s once sturdy faith in Israel wanes in the face of fear for his and his families' safety. Avner loves Israel, but learns that blind allegiance to authority can just as readily cause death as it can prolong life. Amongst the fellow missionaries, the audience can gauge the spectrum of thoughts and feelings that exist on these shaky grounds. Steve (Daniel Craig – if this is film is any indication, a worthy addition to the Bond franchise) sees no worthwhile humanity in the enemies the film makes room to humanize: “The only blood that matters to me is Jewish blood.” Carl (Ciarán Hinds) seeks to retain his sanity in the midst of the bloodshed, where one’s humanity can naturally erode. Bomb maker Robert (Mathieu Kassovitz) questions how true to their ideals their actions are: “We are supposed to be righteous! I lose that, that's my soul.” In shifting between moments of quiet thought and thrilling moments of visceral terror, Munich examines not only the relationship between the thought and the act, but between what is right and what is necessary. Evil is subjective here, the film wading deep in the murky grays of morality.

Many will be, and indeed, already have bee enraged by the political dialogue presented in Spielberg’s film. Many of these are only so because the film allows doubt to enter the equation of thoughts, and even though the film feels a deep love for Israel, that hasn’t stopped many Jewish scholars from practically expelling Spielberg from the community. Munich is the bravest film of Spielberg’s career, perhaps one of the bravest works of thoughtful art of all time. His choice to expose himself for criticism as the cost of getting these issues more into the open – and therefore more into the realm of thoughtful discourse – is brilliantly reflected in a sequence later in the film. Robert (who closely resembles a younger Spielberg – this is no coincidence), stricken with depression from his duties for Israel, takes leave to his cottage home to rest and recuperate. There, he tinkers with his bombs and gadgets, handling them, examining them, and deconstructing them (in essence, learning how these dangerous objects work). Not long after, one of them detonates (foreshadowed as a possible suicide, but never confirmed; hopefully the DVD commentary will clear this up). In short: Spielberg knows that he’ll ultimately touch off a nerve and take a lot of shit for doing so, but these topics and questions must be raised in the open if an answer is ever to be reached. The effect of controversy is often the mark of great art, and Munich finds a thinker, a filmmaker and a Jew offering up a work of personal introspection and anguish that’s says much about the world and the many peoples who occupy it. At the relatively moderate risk of some flack, it hopes to make it a better place.