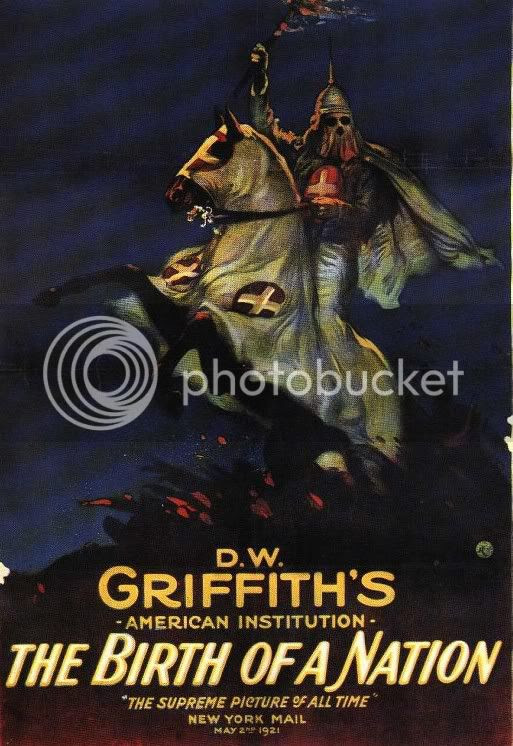 I’ve always been one to refute the overused claim of “it’s just a movie” (or its many derivatives) whenever such is brought up in response to criticisms about immorality or prejudice present in film. Whether intended strictly for entertainment or not, films, existing as part of a larger cultural framework, are anything but an area of removed social neutrality: as much as any other human creation, they capture and reflect portions of the world in which they are created, and must be held accountable for that which they come to represent. This is something I fear is too often overlooked, as mainstream entertainment and other cultural outlets mindlessly stimulate the sedative masses, often without sufficient awareness of their subtle yet far-reaching effects: vigilantly, I keep my eyes peeled to see how these forms have and continue to shape the world we live in.

Such notions hovered closely above my contemplative head whilst recently re-watching D.W. Griffith’s silent Civil War epic The Birth of a Nation. As heralded as it is for its technical artistry and medium innovation, it is equally as derided for, among other questionable qualities, its bigoted portrayal of race relations. It’s far-reaching story covers the years-long events that befall two American families before, during and after the civil war. The depictions of and attitudes held towards African Americans in the film range from laughably cartoonish to outright offensive in the extreme, while the plot ultimately glorifies the KKK and the violence perpetuated by the organization in a manner that would have most unprepared viewers quickly squirming in their seats. Certainly, it is something of a hurdle to cover for even the most experienced film lover, but it is one that must be tackled nonetheless. Riots and theatrical boycotts have dogged the film from day one, even amidst more recent, strictly historical presentations. While these demonstrations are rooted from a desire to correct the social ills present in the movie, they also do it a disservice by refusing it full admittance to the marketplace of ideas that is cinematic culture. In order for its ideas to be truly denounced, the film must be openly visible in the first place.

One of the first films to exceed the 100-minute mark (the most complete prints clocking in at over three hours), The Birth of a Nation is arguably the single most artistically important and influential film ever made, a fact that makes it’s social offenses all the more awkward to swallow. Griffith was among a handful of directors working at the time to forge what came to be the early framework for all of cinema, and it would be a near-impossible challenge to find any elements of modern film that did not originate with or near Griffith’s 1915 undertaking. Because the film sits at the foundation of an entire worldly medium that followed in its wake, coming to terms with its dark side is equally as important as appreciating the artistic originality and supreme craft at hand. Any work, however offensive or even potentially dangerous, has the fundamental right to exist, and having been absorbed into the culture it created so effectively, The Birth of a Nation demands attention. The last fate such a film should suffer is to be ignored.

Seen purely in terms of entertainment factor, The Birth of a Nation is nearly as effective today as it was over eighty years ago, its silent conventions and acting mannerisms as much a part of its creation as any other component, completely natural for those accustomed to pre-talkie filmmaking. Nearly as rich in characters and wide in storytelling scope as any number of other modern blockbuster epics (Gone With the Wind, Titanic - both of which employed Griffith's use of montage to staggering effect), the film is a whirlwind of outpouring as it captures the emotional devastation and social turmoil of war, retaining both intimacy and grandeur in its presentation of a story with both great social breadth and intimate personal details. Griffith’s employment of long shots to emphasize action and spectacle are enthralling, while the close shots of actors finely exhibit the radiantly emotional performances at hand. Much of what is at hand here has been accepted cinematic custom for decades, but despite it’s antiquity, The Birth of a Nation is so full-bodied that it almost completely retains its power to stimulate, despite its innovations long since passing down into accepted cliché.

As well as reflecting the now-unacceptable racist attitudes that circulated at the time, The Birth of a Nation examines the social divide wrought on the nation during the Civil War. The two main families, the Camerons and the Stonemans, harken from the south and north, respectively. Economic fallout and the violent rebellions of former slaves plague the Confederacy both during and after the war. The Camerons former lifestyle is eradicated when the freed slaves are given the vote and, with the help of the corrupt radicals, immediately begin to take over the government formerly of the white man. In anguish over the destruction of his people, Ben Cameron (in a moment of inspiration in such horrifically bad taste that only the most offensive moments ever aired on “South Park” can begin to rival its, albeit unintended at the time, humor) establishes the Ku Klux Klan to reinstate the dominance of the proud Aryan race.

To denounce the film outright may seem instinctive for many viewers, and while justifiable so, it also condescends to the context of the time period the film comes to us from. To watch The Birth of a Nation is to experience an American perspective nearly a century in hindsight: one that is indeed hateful, but one that was also commonplace at the time. The black characters in the film are viewed as less-than-human, generally posited against the proper behavior of the white folk as being rowdy, crude and generally lacking in the most basic of social skills (or even the desire to adopt them in the first place). Black extras are typically used in background shots or for larger mobs; as was customary at the time, white actors in blackface were used for the more major roles held by black characters. The blackface makeup looks quite fake and intentionally so, and it is this quality that largely embodies the blind attitudes held by the film and its makers: the bigotry is incredibly obvious and, detached from the proceedings, quite patently absurd.

That today’s audiences have the privilege of more easily recognizing this fact is indeed a blessing, but greater awareness of the atrocities of the past is anything but a call to cover them up or to forget them. It is the responsibility of modern film culture to preserve this telling artifact so that future audiences might better understand the irremovable blemishes on American history. The Birth of a Nation is often regarded as a masterpiece, and such a statement is not entirely unjustifiable. To understand and appreciate the artistry is not to immediately condone its beliefs, and an outright refusal to even engage the work only encourages a perpetuation of those same offensive ideals; without confronting and coming to terms with them, we only allow for them to reappear later, having not yet been adequately dealt with. That the film embodies darker times that have since been largely triumphed over only makes its continued engagement and appreciation more crucial; The Birth of a Nation links the divide between American past and American present, and allows us to better overcome the sins of both eras by more fully understanding where we’ve come from and, ultimately, where we’re going.