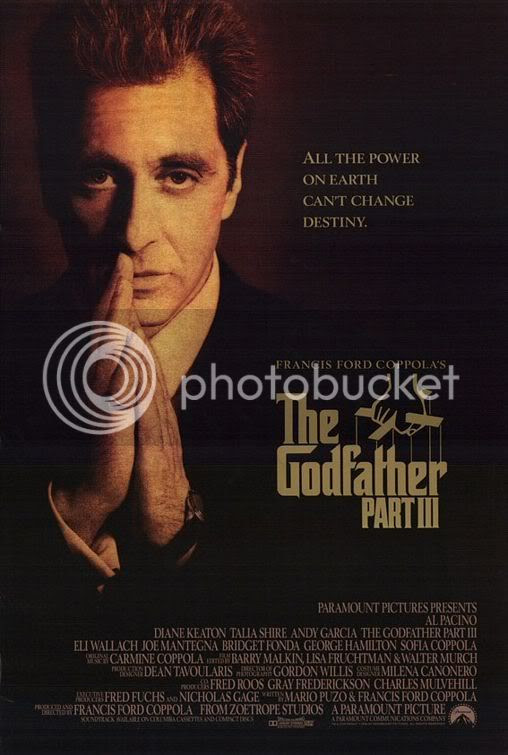 Perhaps best known as a long-standing whipping post for the young Sofia Coppola, The Godfather, Part III is indeed the disappointment many of its detractors assert it to be – in the same way that some of Orson Welles subsequent works can be called disappointments when compared to Citizen Kane. Indeed, this second sequel (coming after an original regularly named the best of all time and a sequel named its superior nearly as often) had a lot to follow through on in the sixteen-year gap (basically everything Star Wars fans want you to think The Phantom Menace disgraced), the very idea of its meeting those masterful standards already a wholly unrealistic expectation, even less so considering how long it must have taken Coppola to get the hellfire of Apocalypse Now’s production out of his system. Ultimately, though, the presence of The Godfather, Part III has been perhaps just as influential as that of its two predecessors, if in a less immediately observable fashion. The last-minute abandonment of the project by Winona Ryder saw the necessary casting of Coppolas daughter Sofia into the empty role of Michael Corleone's daughter, the young actresses first major performance and a damning end to her potential career as a result of the critical lashing she promptly received (and a Raspberry award to boot). Seventeen years later, pseudo-critics and shameless journalists continue to rag on her work; admittedly sub-par, she tries her all to bring depth and nuance to the role (that and – I would assert – her own naivety amongst the more learned members of the cast is appropriate for the character at hand). She may be lacking, but the flaying she continues to receive as a result – as both an actress and a director – is a scathing indication of our cultures oft-favorite pastime of watching the innocent writhe under the heat of our collective magnifying glass. Don’t believe me? Watch fifteen minutes of any reality TV program.

Even without a handicap, however, The Godfather, Part III is a good film, although its somewhat clumsy sleight of hand makes itself evident almost immediately – long before Mrs. Coppola ever has a chance to open her mouth. (Spoilers ahead!) Initially lacking is the grace of movement and restrained familiarity of character that gave the first two films their own operatic suave, although as narrative threads begin to interweave more meaningfully and conflicts rise to a head (approximately halfway through the film), senior Coppola again begins to find his niche (particularly during the ravishing climax set at – appropriately – an opera house in Italy). Before this return to form, however, the films seemingly mandatory moments of trademark violence bear less dramatic heft than they do tend to tread pure camp; without character relationships and progressing events as fully grounded as we’ve become accustomed to, scenes foreshadowing of everything from Mike Tysons alternative boxing tactics to Grand Theft Auto displays of carnage are a far cry from Part I’s severed horse head and Part II’s opening assassination attempt. Here, an aging Michael Corleone attempts to extricate himself from his underworld business practices after having been recognized by the Catholic Church, only for the actions of a vindictive former partner to force him into continuing his dark acts, even as he attempts to atone for his many sins. Part III’s dramatic impact is strong (however much it feels like an echo of its predecessors), with the importance of children and lineage coming to the front of the matter as this family’s saga unravels in the same country where it all began. Some may think that this chapter is better left untold, but my feelings say that, however lesser an experience it may be, it’s necessity to the arc of this trilogy remains crucial nonetheless.