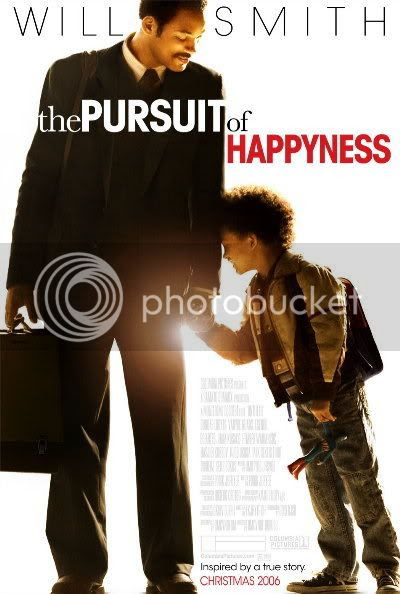 Homogenized filmmaking betrays its better intentions in The Pursuit of Happyness, although – like the economic forces oppressing Will Smith’s doggedly persistent Chris Gardner – even the glossiest of surfaces can’t extinguish the genuine emotions running beneath them here. An offensive trailer itself vies for the Best Picture nomination, but the end result is thankfully devoid of such relentlessly pandering histrionics. Believe it or not, Will Smith is the film’s biggest – and perhaps only – asset (if I’m able to forgive him Bad Boys II, anyone is), instilling a rumbling sense of perpetual struggle into his character who – judging from the rest of the film’s players – was probably far less layered on the written page. Pursuit’s rags-to-riches tale is bourgeois to the core, from the opening tinkling of its Forrest Gump-styled soundtrack to the unwaveringly pretty nature of its 1981 San Francisco surroundings (even the subways are an unvarnished white with but one or two bums dotting the landscape as decorations, while public restrooms are seemingly cleaner than those of the White House), yet Smith anchors it with a confrontational realism that gives the film a social weight otherwise sorely lacking. Behind on rent, hardly employed and now a single dad, Chris applies (and – spoilers! – is accepted to) a six-month stock broker internship program at a local firm, laying virtually everything on the line for a job he has but a slim chance of receiving in the end, despite his high-ranking academic and military achievements. As goes the story, things get predictably worse, worse and worse before they get better in the end, but The Pursuit of Happyness gets points for barely sermonizing its story of ones clawing their way up the economic ladder (Smith’s voice-over does the trick, but scantly appears throughout the entire film), instead letting the tough and true facts about capitalism’s mythological “meritocracy” sink their unloving claws in (although, one wishes that the film acknowledge the racial inequalities inherent to its tale a bit more substantially). Gabriele Muccino’s direction never condescends, but its habitually beauteous Lifetime-esque vision of the lower class’ plight regularly offsets the narratives intended dramatic resonance, while the supporting characters disappointingly serve as little more than obstacles and contradictions to Smith’s hard-working do-gooder. Beneath the disingenuously uplifting score and slick cinematography is something more think-skinned and true, the oft-bitter taste instilled by the American dream no more fully realized than a scene in which Chris’ blood seeps from his arm into a plastic pouch at a donation clinic, his life’s accomplishments in vain as he is reduced to selling his physical body for a mere twenty dollars.