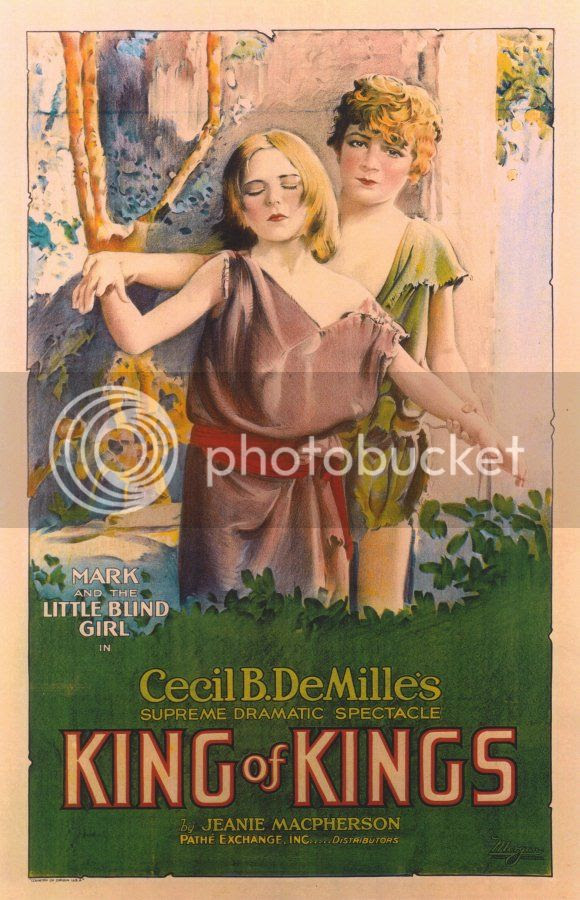 Even seen theatrically and accompanied by a live organ performance (as I was privileged to do so during a special presentation), Cecil B. DeMille's silent would-be epic The King of Kings is a tedious, strictly standard affair, revealing itself as a precursor to Mel Gibson's Christian propaganda piece The Passion of the Christ, albeit without the gore or bloodshed. Originally released as an opener to new theater houses, the film exists primarily to enlighten audiences as to the divine nature of the Christian messiah. In actually showing his godly capabilities as well as why he bore such a threat to the Roman leaders of the day, King of Kings outdoes The Passion in terms of actually providing some meaning for the ultimate crucifixion. But while this work is far from a snuff film, it's sampling of stock character conflicts and overt self-importance renders it little more than a dead-in-the-water melodrama from the days of past.

The first glimpse of Christ (H.B. Warner) is presented via the restored sight of a blind child, positing the audience as both the healed and enlightened. DeMille's overly literally imagery finds little restraint here, both in the grand, elaborate sets and costumes as well as the camera tricks showcasing events of religious and supernatural grandeur. With a bit of narrative liberty taken from the gospel sources, the film's Jesus extricates Mary Magdalene's sins from her soul one by one in a scene completely unaware of its outright silliness. Likewise, the climactic end to the crucifixion sees fire and brimstone rain down upon the unbelievers in an earthquake-like disaster in perhaps the only scene that registers to some tangible effect, even if it feels completely removed from the rest of the film. Ultimately, the exaggerated chaos of it all suggests that those still unconvinced as to whether or not the path of Jesus is the right one have another thing coming, and had better reconsider their status.

Holy its source materials may be in some circles, The King of Kings finds no such divinity in its uninspired biblical retellings, where the good and evil in its characters are worn prominently on their sleeves. Jesus' wise and perfect portrayal is suiting, but from his first glimpse on screen there's never any doubt as to the role Judas (Joseph Schildkraut) will play, rendering his ultimate betrayal completely meaningless. With such reliance on such thinly developed protagonist-antagonist antics, the film never reaches the sense of greater importance it pronounces so boldly. When Christ ascends to heaven three days after his death, the effect is not one of great meaning or accomplishment, but redundancy. Using title cards lifted from scripture, the film is a preachy affair from the very outset, its greater intentions suffocated by it's unwillingness to let the audience appreciate the finer qualities of its message without them being overblown in presentation. Sermons rarely make good films, this one being no different.