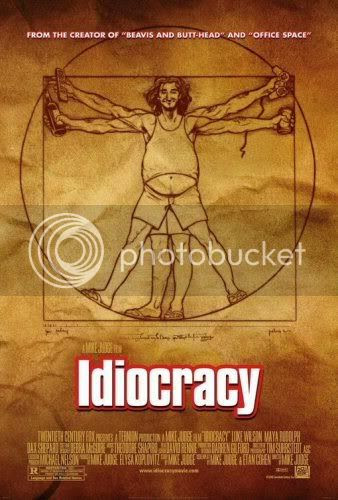 You have to love a movie that imagines a dystopic future in which the U.S. President is a former wrestler and porn star named Dwayne Elizondo Mountain Dew Herbert Camacho. Seemingly guaranteed cult classic status from the moment Fox decided to shelve the film indefinitely (ultimately dumping in it but a handful of theaters in mid-2006 before unveiling it to the world at large on a misbegotten DVD release, comparable to the remnants of a stillborn child), Idiocracy exhibits the bulk of Mike Judge’s recurring trademarks in their wonderfully to-the-point fashion, namely in that it its satire is both scrutinizing of its subject’s downfalls while unquestionably loving of them all the same. The point of focus here is American culture, explicitly manifest in an imagined future where cultural regression has created an entire society of impossibly stupid beings, mental slaves to corporation greed, product slogans, and mindless mainstream entertainment. In the present, average Joe military personnel Joe Bauers (Luke Wilson) is chosen as a guinea pig for an experimental cryogenic freezing process in which he will be frozen for one year in order to test the equipment. Echoing Woody Allen’s Sleeper, Joe accidentally remains a slumber for half a millennium, instead awaking to a world in which retroactive evolution has turned humanity into a mental fraction of its former self. Capitalism has run amuck, with commercialism having destroyed any semblance of culture or science; among many sorry examples, sports drinks have completely replaced water (save for toilet usage), and the use of any vocabulary beyond a narrow range of grunts, slurs and slogans is promptly deemed “faggy”. Many will mistake Idiocracy’s humor as base, vile and stupid – much in the same way so many thought that Judge’s own Beavis and Butthead was a product of shallow Gen-Y culture rather than a distinct commentary on and criticism of it. Their inherent silliness notwithstanding, such imagined cultural outputs of 2505 – a popular TV show called Ow, My Balls! and an Academy Award winning film simply entitled Ass – are hardly a far cry from our less obvious modern equivalents. Judge loves his fellow Americans in spite of their oft-overbearing stupidity, and it is this compassion that allows Idiocracy to be critical without being elitist or nasty (even though, as many nihilists like myself would argue, such nastiness is often more appropriate than not). Perhaps most impressive, however, is how well the film exhibits Judge’s ability to stretch a budget to seemingly impossible lengths. Certainly, while a great deal of his futuristic vision is accomplished through obvious matte paintings, dodgy CGI, and unconvincing miniature work, but this bare-bones minimalism appropriately lends a sense of legitimacy to a film that spends a great deal of time condemning the effects of commercialism’s penchant for overindulgence. Ditto the sitcom-styled narrative and easily-resolved conflicts; Idiocracy’s intelligence and effectiveness is found in the details, its effectively uncomplicated approach not unlike the open arms of someone loving enough to actually point out the flaws within that need our utmost attention. The quality of laughs may waver sporadically throughout, but the film is most effective in suggesting that even when we’ve hit rock bottom, we still have the power to redeem ourselves – with two more years until the next presidential changeover, we need that message now more than ever.