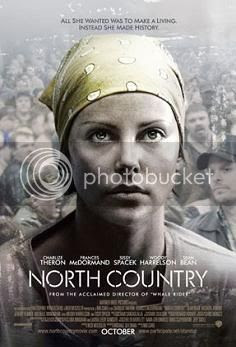 Few things are more dramatically heinous than depicting complex and far-reaching social problems with such single-minded intensity so as to reduce the effect to pure emotional propaganda. When a film depicts its events as occupying reality rather than commenting on it, the use of such broad generalizations and black and white us vs. them distinctions (while perhaps making things palatable for the cinematically inept) renders any potentially valid points mute when one looks beyond the Lifetime cartoon antics at hand and out into the real world. In tackling the issue of gender relations and sexual abuse in a male-dominant workplace, North Country sees fit to define its characters exclusively by their status as either victim or victimizer. Charlize Theron’s Josey Aimes gets a job at the local mine to support her two children after leaving her abusive husband (enter the disapproving father and supportive mother for contrasting dramatic effect). There, the handful of female employees must endure the taunts and come-ons from the horny male populace on a daily basis in order to bring home the bacon. Bearing the mind-numbingly overused “based on a true story” label, North Country takes excessive dramatic liberties with the story of the real Lois Jensen and her class action lawsuit against the mining company; excessive not because adherence to fact is mandatory, but because the film ultimately lauds its “inspirational” appeal more than it’s half-assed examination of the turgid social and sexual climate it pillages for tears and applause from the audience. In the end, it’s all about “standing up,” while the utterly ridiculous build-up to the truncated conclusion may as well play out in a boxing ring. Director Niki Caro exquisitely examined female empowerment amidst oppressive cultural conditions in her wonderful Whale Rider; on the other hand, North Country condescends to its audience and reduces its characters to LCD-levels of complexity, negating the seriousness it feebly reaches for in the process. Josey ultimately triumphs, but only because her past experiences somehow validate her present battles as a freedom fighter, and, whaddya know, her nice male lawyer is accused of being gay at the local bar (so we know he's okay)! These are deep social plagues that demand serious thought and attention, yet North Country would have you believe it’s no more complex than a playground quarrel between boys, girls, and cooties.