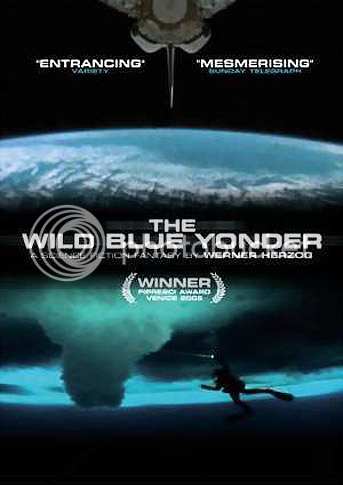 Herzog’s use of cinema defies the very fabric of our known world. From the existential immersion of such “fiction” films as Aguirre: The Wrath of God and Fitzcarraldo to the minute grandeur found throughout his documentary work, the oft-mad genius now takes us on a similarly boundless visual fantasia through his own breed of mockumentary. An opening title card reads “a science fiction fantasy,” as The Wild Blue Yonder finds the director rekindling many of his long-running obsessions in the form of an wholly invented story of a dying alien planet and the journey taken there by a group of human astronauts. One of its former residents – conveniently in human form (a wonderful Brad Dourif, familiar to most as Grima Wormtongue from The Two Towers) – narrates the tale and reminisces his far away planet, he and many other former inhabitants having evacuated long ago in the midst of a destructive ice age.

Herzog (assuming his audience capable of suspending disbelief enough to overlook the presence of some unavoidable anachronisms and inconsistencies) pieces together scripted interviews about theorized space travel, NASA footage of the 1989 STS-34 Space Shuttle mission (recasting the astronauts as travelers en route to the titular galactic body), and underwater footage of artic marine life (presented as the extra-terrestrial planet), all held together by a wholly alien (to most viewers, that is) score featuring Dutch cellist Ernst Reijsiger and Senegalese singer Mola Sylla. The synchronization of these marvelous sights and sounds creates an overwhelming sense of genuine long-ago, far-away ness (if Stanley Kubrick and David Bowie ever had a love child, this would have been it), while the often sublimely ridiculous use of natural footage (at one point the “inhabitants” of The Wild Blue Yonder are even given voices and their own distinct tongue) prove a dazzling ode to the mesmerizing power of nature. Our Alien narrator, meanwhile – often before locations of abandoned buildings or decrepit scrap heaps – yearns for the preservation of earth’s natural beauty and the staying of mankind’s viral natural imperialism, the human population committing many of the same sins his own race once practiced in vain.

The use of marine cinematography is nothing if not coolly brilliant (tapping into the fact that our own oceans are often more alien and unexplored than even distant worlds), as countless bits of floating ice sprinkle through the alien “atmosphere,” and underwater structures are imagined to be ancient alien cathedrals. Being so naturally outlandish, the experience can surely be interpreted in many a different way, but it is the unwavering conviction brought to the table that gives it an unprecedented emotional and spiritual weight, particularly when it’s imagined human explorers are metaphysically transported back to earth via light particles, only to find a detoxified, reborn world awaiting them. An experience that ultimately creates a plane of higher consciousness through its hallucinatory images, The Wild Blue Yonder is testament to the power of film to create new histories and imagine new beginnings.