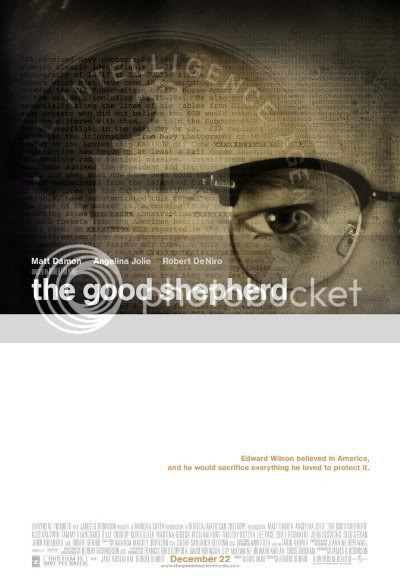 Robert De Niro’s earnest yet deflated The Good Shepherd plays like a Screenplay 101 final exam submission, crafted chiefly to satisfy a list of requirements: it’s Very Important Subject Matter (check) provides a foundation for a Character Study (check) with Estranged Family Subplots (check) and a Prolonged Moral Dilemma (and check). Some great films are born in the editing room; while we’ll never know whether or not such a fate could have bestowed itself upon this effort, a more liberal nip-and-tuck certainly wouldn’t have robbed this bloated would-be epic of anything it believes itself host of. The story of the formation of the CIA, the Bay of Pigs debacle and related aftermath as experienced by agent Edward Wilson (Matt Damon), the film exhibits a strong knowledge of its history (character names have been changed to protect their real-life counterparts, however) and a deep concern for the political and moral implications brought into question by unwavering commitment to one’s country. Roped by responsibility into marriage after a one-night stand, Wilson is recruited overseas by the Office of Strategic Services while his wife is still pregnant, unable to return home for several years. The postwar formation of the CIA furthers his estranged relationship to his wife and son, and his adherence to country slowly but surely costs him his soul. This we know, because for one-hundred-and-sixty-five relentless minutes The Good Shepherd damn near drowns itself with its unwaveringly solemn sense of importance, never going beyond surface-deep concoctions to convey its sense of emotion or conflict. There’s plenty of important fodder here but the script never probes the weighty moral quandaries beyond the obvious (angry wife, resentful son, etc.). Caught halfway between a respectful history lesson and a shameless salute to Oscar, De Niro directs with zero flair while his actors and actresses – with the exception of Angelina Jolie – approach the material seemingly under the impression that anything less than the most stoic ensemble performance of all time will render its dramatic underpinnings mute. Jolie doesn’t fare much better, but like a tiger fresh out of its cage, she at least injects some zest into a role that was surely as faceless on the page as its many fellows; the rest of the cast suggests humans devoid of emotional range, as if from some futuristic dystopia. While its political pontifications suffocate under De Niro’s inability to give his film a tone other than impending, ethereal dread, any substantive threads of its intended character examination are swiftly negated by the film’s insistence on gently coddling its audience every step of the way. De Niro and company have plenty to say but want to offend nobody while saying it, and in the process exhibit the wide gap between the like of Steven Spielberg’s Munich and a the work of someone who would rather please the masses than truly take a stand. As such, The Good Shepherd is virtually irrelevant.