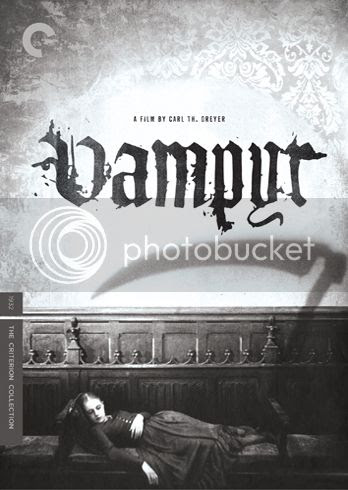 Through a hallucinatory combination of desaturated images and muffled audio (as if implying that the viewer themselves is in the state of a trance), Vampyr exercises its muted horror not in the form of a traceable narrative but by means of the lingering vision of a haunted and often logic-defying dream. It’s cloudy visual aesthetic the result of an accidental stock exposure (which, when discovered in the dailies, impressed director Dreyer so much that he chose to repeat the process for the entire film), the film’s ever-gliding camera effortlessly creates an overwhelming sense of place, even while that place is ever-shifting and just out of grasp. Bodiless shadows, unseen spirits and other suggestions of the unreal cumulate in a nerve-racking sense of menace, the conflict manifesting less in physical violence than a dreadful unease. We never really see the vampire at the source of the film’s death and misfortune (at least not in expected fangs-and-cloak form), but the presence of the undead is unmistakably felt throughout.

Given the emphasis placed on mood, it is unsurprising that the scenes committed to narrative exposition are among Vampyr’s least compelling, yet even these approach a level of tonal mastery. The loose, loose story concerns a wandering philosopher, David Gray (Julian West), who comes upon a country manor, his arrival immediately foreshadowing some sense of doom when an old man inexplicably enters into his room, leaving behind a note marked “Do not open until after my death.” Compelled to explore his bizarre surroundings, David bears witness to the bizarre murder of the old man and subsequent attack on one of his two daughters. The shadowlike spirits abound and mysterious folk suggest deeper threads of foul play, although David has less of an active role in the matters than he does simply act as an audience surrogate. The story here is beside the point; what we’re watching is not unlike some metaphysical duel between the spirits of good and evil in a pseudo-physical manifestation.

If Vampyr is but a dream on film (which is to say it’s not nearly as complex as any of Lynch’s dream-within-a-dreams, although at times it proves as seductive as his Mulholland Drive), then Dreyer’s camera acts as the dreamer’s floating presence. Tranquil pans convey a sense of action beyond the limits of the frame, often happening upon dreadful deeds just committed. Characters themselves act as if in something of a trance, hardly sedated but nonetheless acting as if controlled by forces other than their own. This languished tone conveys the spiritual chaos at the core of the film, but its use of inexplicable and eerie imagery – from a funeral procession seen from inside the coffin to a person buried beneath a pile of purifying flour – is equally foreboding. Dreyer – fresh off his masterpiece The Passion of Joan of Arc – again uses his composition to its fullest potential, the characters and their surroundings positioned in manners most suggestive of ill will lurking about. That some consider it one of the finest horror films ever made is both a blessing and a curse - Vampyr is a masterwork, but more than simply being frightening, it penetrates deep into the psyche to carry out its menacing, ethereal lurk.