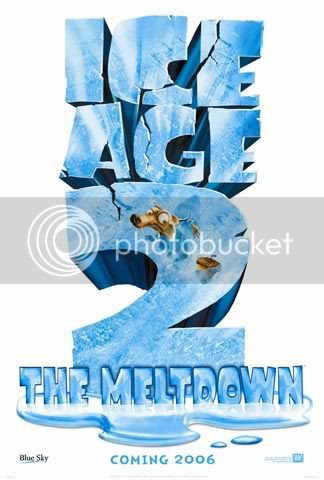 In making the same fatal error as do about 50% of all sequels of the past five years (in that they take the concentrated elements that made their predecessors so popular and amp them up to unbearable quantities, all the while forgetting the basic storytelling elements that made them successful in the first place), Ice Age: The Meltdown may as well be called Ice Age: Reloaded. The original film was slight and mostly uninspired, but it had one key element going for it: memorable characters with unique personalities. Amongst these were two stand-outs: Scrat, a prehistoric squirrel / rat critter with a recurring existential dilemma in the form of an ever-elusive acorn, and Sith, a lisp bearing sloth who, thanks to the vocal talent of John Lequizamo, could hardly open his mouth without uttering a hoot-worthy one-liner (and simultaneously putting Eddie Murphy’s obnoxious Shrek Donkey to shame).

Losing the dullard human element from the first film, The Meltdown sees the original motley crew in the same unfortunate position as the rest of the animal population. The ice that has existed for thousands of years is melting, and high grounds must be reached quickly if anyone is to survive the rising waters. With this handy road-movie plot in hand, the film launches new characters and meandering conflicts into the mix to pass the time in lieu of any real story or substance to be had. Sith doesn’t get enough respect, Manny (Ray Romano) might be the last of his species, and Diego (Dennis Leary), the sabertooth tiger, is afraid of water. These newfound obstacles are not only thematically pointless (in that they disappear only because the plot demands them to at key points, rather than any tangible character or story development), but are laced with the kind of hipster humor marked with a five-minute expiration date once their shallow pop culture references fade from the public spotlight.

I don’t know who’s more irritating amongst the new characters: the possum brothers voiced by Seann William Scott and Josh Peck, or the mammoth (who thinks she’s a possum) voiced by an overenthusiastic Queen Latifah (somebody get me out of here). Amidst all the cheap visual gags and unnecessary musical numbers is a giant narrative vacancy occupied by a plot that even straight-to-video features tend to rise above. For as endearing as Scrat’s antics are, even they can’t sustain the lackluster jokes that pass for humor for the bulk of the ninety-minute running time. If there were any creative justice in this world, the effort put into Ice Age: The Meltdown (as well as the mandatory future sequels) would instead be channeled into a series of cartoon shorts featuring Scrat alone (who is, truthfully, the only reason anyone sees these damn things). They could be aired before various children’s and family films, and would later be compiled into a DVD collection. That, of course, would be the right thing to do (indicated most tellingly by the fact that this film's teaser trailer was composed entirely of the film's funniest two minutes). But that route wouldn’t bring in a $60 million opening weekend, would it?