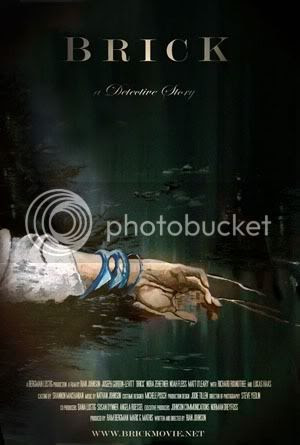 Brick exemplifies the difference between a cinematic talent show and mere karaoke. In an admittedly unique move, the film transplants classic film noir conventions into the more seemingly untainted setting of a modern American suburban high school. Flattery may be the most sincere form of praise, but here the catch comes with the fact that it does so without any sense of moral quandary – it’s rhythmic imitation is impressive, but it yearns for soul beneath all the visual pizzazz and hard-boiled dialogue. Rather than extending this genre-transplanting concept in such a way as to examine the strains that develop between the various social factions already existing within the tumultuous high school habitat (itself an intense social nesting ground for many an American adolescent, myself speaking from long-valued experience), it simply assigns the types of goth, loner, jock and nerd to their appropriate noir counterparts (as good as the acting is across the board, nobody here has the opportunity to play anything other than character types). When Brendan’s (Joseph Gordon-Levitt) ex Emily (Emilie de Ravin) goes over her head into a drug-laden underworld, he optimizes his personal connections and cunning wit to find out what happened to her and why, to predictably mixed Chinatown-esque results of resistance and cooperation. It’s audio visual synchronization is regularly spot-on when it comes to replicating the trademarks of its source material, but Brick quickly takes on the aura of a production bent on completing a checklist of genre clichés more so than digging into the soul of those very trademarks. Often absorbing but never more than first-class mimicry, Brick exists primarily as a reassuring pop quiz for film majors, which is to say it’s aesthetic only goes skin deep.