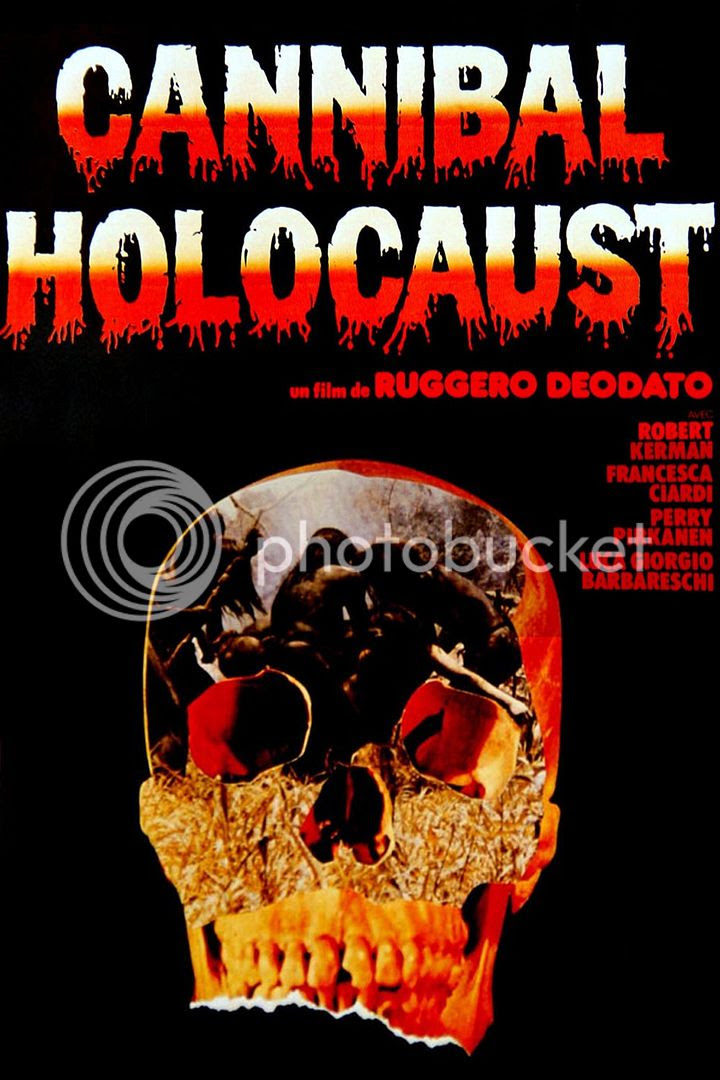 Says a female television executive in Cannibal Holocaust: “Today people want sensationalism. The more you rape their senses the happier they are.” Count me out of this demographic – one of many laughable examples of the film’s attempts to justify itself as some sort of moral examination on cultural violence and the destructive effects of imperialism. A group of four documentary filmmakers travel deep into the Amazonian to see what they can uncover about the supposed cannibal tribes who reside there. No surprise: none of them are ever heard from again. When NYU Professor Harold Monroe (Robert Kerman) attempts to uncover their whereabouts (or those of their remains), he and his rescue team are able to establish good relations with one of the native tribes, only to discover the fallen foursomes remains and the footage they shot, which includes – to name but a few instances of gut churning violence – native rituals involving forced abortions, rape with a stone penis as a punishment for adultery, full body impalements, communal rape of a native by the male filmmakers, and the decapitation and dismemberment of (real) animals.

The Passion of the Christ always struck me as being gratuitous in its use of violence without context (and extensively, without any real meaning behind it), but Mel Gibson’s torture chamber piece should be considered a humanitarian effort worthy of the Nobel Peace Prize compared to this. A proud supporter of free speech myself, the most offensive aspect of Cannibal Holocaust is its disingenuous claim to supporting said rights - a shallow attempt to frame its exploitation as a protest against exploitation itself. Reads the opening title crawl: “As distributors of this film, we wish to state with absolute sincerity that by no means do we condone the artistic decisions employed by the makers of this film. However, as firm believers in the constitutional right of free speech, we do not believe in censorship.” Let me add myself to the many who have already called this out as complete bullshit, a moral reach-around that, even if it were well intended, forgets that free speech has never been an absolute (let’s hope all screenings of the film end with the distribution of civic books to the audience), and that snuff films would never be permitted under the Constitution. Violence in film can indeed be a powerful tool, particularly when used to examine elements of reality that demand moral grappling and intense philosophic inquiry.

Cannibal Holocaust would like you to think it serves this purpose; at the very least, it wants to package its gorefest in such a way that junkies who get off on it don’t immediate check themselves into some sort of moral rehab (something I whole heartedly recommend to anyone who enjoys this for its gore factor - if they're not already beyond help). While the collected footage is screened for TV producers who wish to use such “sensational” material to draw higher ratings, the film regularly cuts back and forth between the worst of the material being projected and the reactions of the audience, whose glazed-over eyes may as well be watching Howdy Doody. After all said and done, the professor wanders outside to the New York cityscape, thinking via voiceover: “I wonder who the real cannibals are” (presumably, to gorehound hipsters dropping their jaws in a moment of pathetically profound realization). The completely heinous nature of the film, however, is exposed through its own inconsistencies, from the pseudo-artsy scoring of supposedly raw footage (what’s the decapitation and cannibalization of a human without flowery synthesized music?) to the fact that real animals were used for this self-proclaimed expose on the evil within men (as far as horror films serving as commentaries on our obsession with violence in the media go, The Devil's Rejects puts this thing to shame). For years now, I’ve called Bad Boys II the single worst thing I’d ever watched, but at this moment, I’d rather cuddle with Michael Bay before ever coming close to this atrocity again.