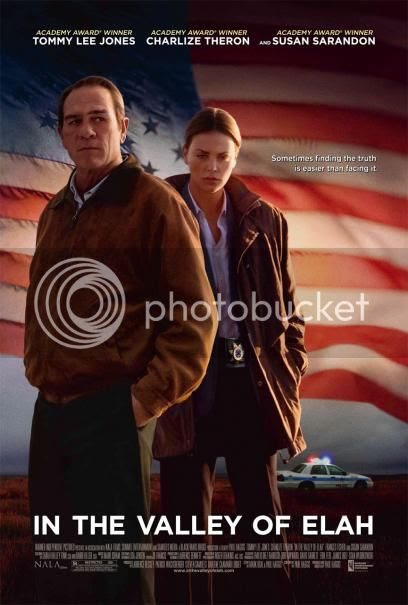 For a filmmaker so intent on using his craft as a hammer with which to reshape society, Haggis' canvas leaves nary an impression on the heart or mind. Although a welcome (however slight) improvement over the embarrassing histrionics of Crash, In the Valley of Elah nevertheless continues the writer/director's shallow brand of self-important posturing, with this film's somber, meandering tone but an antithetical means of once again drawing out such a blatantly calculated, reductive deconstruction of its chosen issues. Like its Oscar-winning predecessor, Elah genuinely wants to better our self-understanding and ability to recognize complex social troubles - this time, the repercussions of war and notions of patriotism amidst incontrovertible failures of government take the place of racism and its derivatives - but such infuriating pandering as is flaunted here serves more to reassure naivety than to raise substantial issues or ask meaningful questions. (Minor spoilers ahead)

Hank Deerfield (Tommy Lee Jones) is a reserved man, proud to have served his country and proud that his two boys have chosen to do the same, even though his eldest gave the ultimate sacrifice in a helicopter crash ten years ago. When his youngest, Mike (Jonathan Tucker), goes AWOL after returning to the states from Iraq, Hank senses something out of order, and travels in person to the base to search for clues as to his unexplained absence. Time gives him the tragic answer: a body, hacked to bits, burnt, and long since scavenged by wild animals, has been found off a secluded highway just inside military borders, though how or why his son would have met such a horrific end is anyone's guess. While discrepancies as to where the murder actually took place see the case juggled between military and city police, Detective Emily Sanders (Charlize Theron) helps Hank sort through the barriers of the system and the mounting clues that refuse to add up.

The revelations Haggis milks out of this murder mystery scenario might smack of greater arrogance if the lot of them weren't so freaking obvious. After sneaking his son's cell phone out of his military quarters, Hank hires a local techie to descramble the video files on the damaged chip. As the investigation into his son's death reveals corruption at nearly every turn, the reassembled video footage taken by Mike on the battlefield slowly trickles into Hank's inbox, revealing bit by bit that, well, war ain't so pretty, and even the best of our boys often take part in heinous acts that leave dirt on the soul. Haggis acknowledges the need to cope with wartime anxieties and the violent tendencies that often manifest from such experiences, but his statements on such moral quandaries add up to nil; as with Crash, we're bombarded with easy emotional triggers but any attempts at probing stop at the surface. Bush and Kerry hang around the scenery via radio and TV broadcasts, their presence suggesting nothing more than a bland "what if" proposition. These inquiries smack of a liberal wank-job, and rather than potentially offend anyone in the process (minus the forced idiocy of one pivotal El Salvadorian janitor), Haggis's gestures fail to say a single thing of worth or substance.

Ultimately, the point here is that America is stuck in a hole of its own making and we need more help getting out of it than we're capable of, a lesson encapsulated by the film's bookending setpiece in which Hank, after noticing an American flag hanging upside down outside of a local school, teaches proper flag etiquette to the aforementioned janitor. Haggis is too innoxious to possibly slander outright, and so it is with pure obliviousness that this scene smacks of both racism and the kind of well-intended condescension he trades so abundantly in. This is where the danger of his films comes through most strongly; they're wolves in sheep's clothing that have long since forgotten that they aren't actually sheep, and like Crash, In the Valley of Elah asks nothing of the audience. It restates the problem as if it were the solution and sends us on our merry way, placated ignoramus one and all.