Gleefully tossing aside any perceived notions of good taste, Re-Animator established its maker as a premiere genre master in the same vein that Blood Simple and The Terminator announced the Coen Brothers and James Cameron to the world. Stuart Gordon's foray into the outer limits of life, death, and heads carried about by their decapitated former bodies is a nearly operatic exercise in splatter, hilarious and horrific all at once and utterly without apology. Though its button-pushing manipulations of sex and violence pale in the wake of the past 22 years worth of cinema, its raunchy sincerity remains a force to be reckoned with; although very much a black comedy, Re-Animator doubles as a touching love story delivered with equal levels of seriousness, the two qualities constantly pushing at one another with an electric fusion of energy. As if afraid he'd never be able to make another film, Gordon pulled out all the stops, the result being a dauntless work achieved only through the naivety of it being a practically impossible film to make in the first place. Too add audacity to boot, Richard Band's "original" score echoes Bernard Herrmann's arrangements for Psycho around every corner, appropriately complimenting both the learned compositions at hand as well as the many cinematic texts that Re-Animator throws into the viewers face at lightning speed. 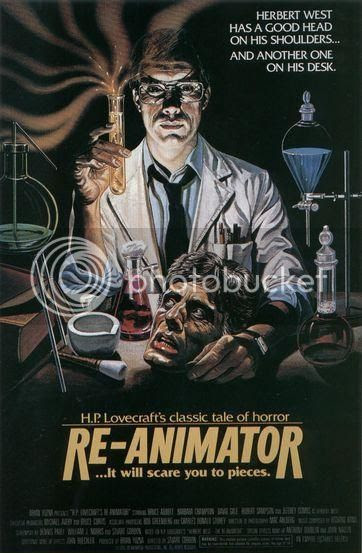 The emboldened young medical student Herbert West (Jeffrey Combs) arrives at Miskatonic University (a fictional school common in horror tales, first created by H.P. Lovecraft in his here-adapted tale "Herbert West-Reanimator") after a less than desirable ending to his studies in Switzerland. Though the epitome of professionalism, his pomposity is quickly at odds with the faculty of his new school, whose work he considers close-minded and outdated; his mission, slowly revealed, is to conquer "brain death" by providing life to deceased bodies well after the heretofore accepted point of no return. After a brouhaha with a resuscitated body sees the Dean of Admissions (Robert Sampson) killed (only to be reanimated as a raving lunatic), Dr. Carl Hill (David Gale) begins to interfere in West's experiments, in hopes to acquiring his secrets and claiming them for himself. Meanwhile, Megan (Barbara Crampton) - daughter of the Dean and fiance-in-secret to West's roommate Dan (Bruce Abbott) - suspects foul play, and works with Dan to uncover Dr. Hill's motives.

Though Herbert West remains the most iconic element of Re-Animator's postmodern indulgences - with neon green syringe in hand, no less - it is actually the oppressed relationship between Megan and Dan that provides the film with its much-needed emotional core, one that is ransacked by chance, evil schemes and misguided bouts of love. Gordon preludes their plights with touching moments of young love, although there is nary a doubt as to their imminent inclusion in the events ahead. Re-Animator's romanticism is genuine but understandably prone to complications of the supernatural kind; when Dr. Hill orders a walking cadaver to kidnap Megan - over whom he has held an unhealthy obsession for some time - the subsequent torture she finds herself subjected to is likely to derange any viewers sense of their physical self, gender notwithstanding. West's actions may borderline on the insane but his sense of right and wrong is ultimately in the right place, his ultimate fate continuing in the lexicon of mad scientists gone awry. Re-Animator's set-up is so delicious it threatens to diminish its payoff simply by comparison, with the ultimate explosion of zombie mayhem defined more by the energy of its performers than its sense of spectacle. In its best moments, the film itself practically leaps off the screen.