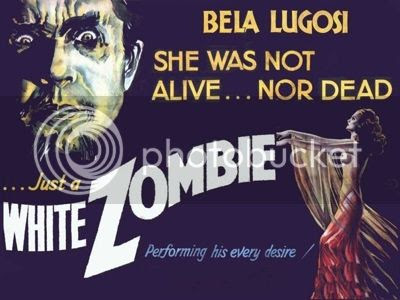 White Zombie’s foray into the supernatural feels something like the forging of a legend. When a young couple, en route to be married, comes across a funeral in the middle of the road (where local grave robbers will be less inclined to steal the corpses for their voodoo practices), the film effectively establishes its mysticism as an unavoidable presence in daily life. Neil (John Harron) and his fiancé Madeleine (Madge Bellamy) have traveled to Haiti for their unification, although the superstitious folklore around them heeds them flee some unseen danger, first suggested when a strange man observes them from the road, his seemingly hypnotized servants causing the couple’s driver to flee in panic. Here, the line between life and death is but a thinly veiled schism between lovers, while White Zombie’s entrancing – if occasionally clunky – development of this premise weaves a haunting morality play of gothic romanticism. The film lays it’s emotions on thick but its confrontational immediacy renders them practically irrefutable.

A mysterious Mr. Legendre – Bela Lugosi, in one of his finest roles – plays the puppet master pulling the strings behind these happenings, having obtained power over the living dead, whom he wills to do his bidding in the form of both manual labor and more nefarious deeds. Charles (Robert Frazer), distraught over his unrequited love for Madeleine in the face of her impending marriage, asks for help in winning her affection. Legendre tells him that, apart from making her a zombie without will, no other way exists to wrestle her away from her current life, a terrible choice that Charles’ aching heart only reluctantly agrees to in the moment of truth. Seemingly dead, Madeleine is buried, only to be excavated shortly thereafter by Legendre and his zombie slaves, her empty grave discovered by the mournful Neil after a night of heavy drinking. This passive love triangle embodies the film’s dramatic core, with the genuinely selfless Charles’ quickly coming to resent his twisted part in Madeleine’s transformation. “I can't bear those empty, staring eyes,” he says in anguish. “Better to see hatred in them than that dreadful emptiness.

Victor Halperin’s evocation of this tragedy unfolds as a series of grand melodramatic gestures, his visuals roughly hewn as a result of their pushing the technical limitations of its day, with multi-layered compositions and one choice split screen sequence employed so as to embolden the pulpy sense of romantic duress. Lugosi commands attention with his deep, penetrating eyes and rhythmic modes of speech, and so too does the film’s use of space invite entrancement. The silhouettes of the dead march silently across mountaintops atop the nighttime sky, while deep shots of and inside Legendre’s seaside castle suggest a vast cavern of lost souls in which Neil and Madeleine’s love strains to endure. White Zombie’s canvas is too condensed to achieve absolute greatness but the mastery of mood and emotion on display suggests a work that has been fully realized within its own boundaries, elevating itself above its particular minutiae and into the realm of myth. Through its own ravishing simplicity, the film achieves the near-operatic.