Despite the strongly emphasized exoticness its Haitian scenery, The Serpent and the Rainbow may be Wes Craven's most pedestrian film. This says a lot about a director who has defined his career largely through the presentation of everyday scenery perverted by the unexpected and the supernatural, from Freddy Kreuger's creepy distortion of his surroundings to the tight, uncanny claustrophobia of the seemingly innocuous Red Eye. This 1988 deviation deals with horror of a more singularly supernatural kind: how many of its bizarre events are tangible, as opposed to imagined terrors duking it out with a hypnotized reality? Such material would seem to befit Craven's surrealist sensibilities but the film never rises above a merely quotidian perspective; it stands more than a leg up from the condescending, desaturated color palates and cultural reduction of globe-hopping junk like The Last King of Scotland but its bourgeois form wants for mystery or intrigue. In the original Nightmare on Elm Street, we saw Freddy's wake of destruction, but it was his often unseen, wholly felt presence that worked the film's wonders. The Serpent and the Rainbow negates such potential through its disinterested aesthetic, and generally forgets the old adage that less can be more. 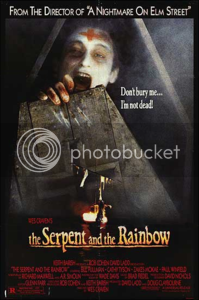 In traditional folklore, the earth was represented by a serpent and the heavens a rainbow, with all creatures dying somewhere between the two. Man's soul, however, allows him greater suffering than that which exists in the physical world, and it is this crux upon which the film builds itself and quickly falls stagnant. Bill Pullman is Dennis Alan, an American medical researcher sent to Haiti to investigate the apparent reanimation of the dead that has been documented by the locals; one man, known to have died and been buried over a decade prior, had just recently been photographed alive as could be. Dennis' investigations find him quickly involved in both the local radical movement against the oppressive government as well as voodoo practices that blur the line between reality and imagination - or, quite possibly, the physical world and that of the afterlife. Only sporadically does Craven effectively showcase these unearthly elements, and often time incidentally at that (such as the visual blackout when Dennis finds himself buried alive); most of the time, the film suggests and overly decorated haunted house, its art direction excessive to the point of implausibility, its literal evocation of the supernatural disappointingly leaden and unimaginative. Many of these flaws are relative but they nonetheless thirst for personality. From Pullman's clumsy narration to the complete lack of context for the narrative's central political conflict, the film amounts to little more than a lethargic tour guide.