Resident Evil purports to reinvent its classic horror roots as a modern rock-out action scenario, made by and for fans of the popular PS2 videogame line in which the dead are brought back to life by the deadly T-virus agent. Consider this long-time fan dissatisfied, then. The film approaches cool for the entirety of its running time but never quite makes the cut, constantly weighed down by the baggage of its own split personality and its total inability to rectify that internal conflict. A cheeky, flashy construction of characters defined by their physical features, pat personal exchanges and sharp quips ready for any scenario at hand, Resident Evil would appear to be campy videogame goodness incarnate, simplifying its human scenarios to their least common denominators so as to better melt into it's slick construction of pop culture parts. Ultimately, though, the film plays its hand entirely too straight; failing to justify its proceedings as camp, they end up not unlike some retarded Aliens wannabe. Sometimes, legitimacy ain't such a good thing. 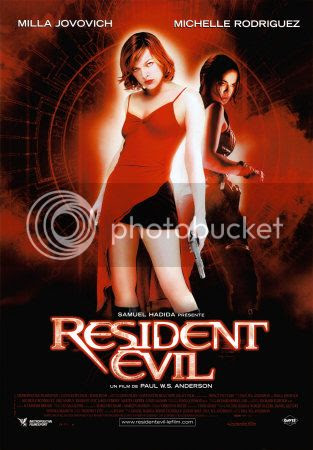 Too bad, then, because the film is loaded with opportunities for the kind of kick-ass shoot-em-ups and accompanying social diatribes only offered by the most ironic of genre flicks. The Umbrella corporation (architects of the aforementioned T-virus) is the largest manufacturing company in the world, their hands in everything from government politics to the medical industry to - unbeknownst to the public and all but the highest ranking of its employees - chemical and biological weapons manufacturing. Right here, the title reflects the kind of evil corporations instill into our daily lives, and like the damned Company of the Alien films, this kind of commentary is implicit in the films narrative, though one might be hard-pressed to notice it given how droll its unfolding conflict is. When a sample of the T-virus is exposed to the unprotected environment inside The Hive, Umbrella's labyrinthine underground facility, the computer system therein (known as the Red Queen - essentially, the young cunty British equivalent to 2001's HAL-9000) goes into suicidal lock down mode; killing everyone inside is the only surefire way to contain the deadly agent. When an emergency S.W.A.T. team enters the distraught facility to search for survivors and to shut down the malevolent computer system, they quickly discover the power of the Umbrella's experiments, as well as the fate of its many perished employees. 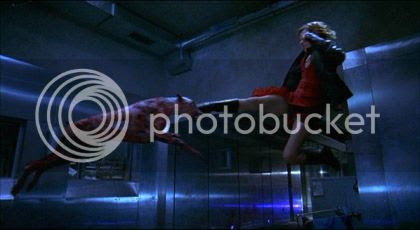 Resident Evil may be the only videogame adaptation that wants for a lack of style, its flat and lifeless compositions failing to evoke any connection - physical or otherwise - between its characters and their lethal environment; the two feel like separate entities meant for entirely different productions, and for a film so eager to headbang, its mise en scène is remarkably tame. This disconnect reinforces the sense of forced seriousness and distracts from its gun-crazy aspirations; the intended aura of perpetually encroaching danger is totally moot and its characters - who should be regarded by the film with superficial candy-coated affection - are instead empty shells merely waiting for their time to clock out. The film's source materials can be similarly written off for their total lack of depth but at least their guilelessness allowed for such shamelessly surface-laden indulgences. Here, spastic attempts at shocking the audience suggest cinematic turrets syndrome while the film's sampling of virtually every gimmick this side of Halloween is not unlike a grab bag desperate for your attention. More than anything, Resident Evil is entertainment in dire need of its own self-assurance.