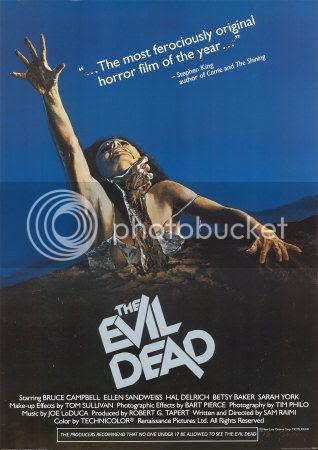 Sam Raimi's grueling debut feature toys with the viewer not unlike its own doomed characters, simultaneously playful and merciless. Although the initially obvious, almost over-the-top channeling of genre conventions (the creaking porch swing, ominous thunder and lightning to matching visual cues, the full moon blotted out of the sky by encroaching clouds) suggests little more than a jokey frolic through haunted house territory to come, it is this sly take on the material that allows the film to slowly turn into a nightmarish Jackson Pollock composition come alive before the audience even knows what hit them. Constructed on a minimal budget over the course of several years, Raimi's film is fiendish in its alternation between the perspective of predator and prey; even when the audience assumes the viewpoint of the film's roaring, malevolent spirits, the primal immediacy of these handheld shots totally disarms any notions of physical space or safety. Eli Roth might get his rocks off from literally torturing the audience but his chickenshit exploitation schlock knows not of such savagery. 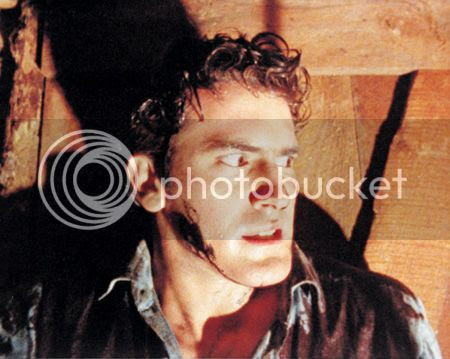 Such off-the-cuff filmmaking befits material that has all but become horror legend over the past quarter century, itself indebted to countless tales come before it from all mediums of the genre. A weekend getaway with several college buddies ultimately sees Ash (Bruce Campbell) fighting for his life when unseen forces in the woods become alive and attack their secluded cabin; Cheryl (Ellen Sandweiss) senses something wrong after they discover the bizarre Book of the Dead in the cabin basement but her fellows scoff at any perceived notion of danger. It isn't long, then, before all hell is raining down on the cabin, with roving spirits infecting its occupants, turning them into zombie-like menaces bent on destruction. Raimi's full-frame compositions make the most of his probing wide-angle shots, with everything from the eerie excesses of his Guignol indulgences to Campbell's inimitable face mugging the camera accruing an extravagantly nightmarish quality that never wants for a few more dozen gallons of blood. The film seems lightweight but its thrills quickly become a pervasive force to be reckoned with; cheesy effects often appear ready to burst at the seams but Raimi's eye for lighting and audio/visual augmentation make for some of the most grotesque, prolonged sequences of unadulterated terror every shown in a theater, from one particularly demonic death rattle to Cheryl's literal rape by the thorny vegetation outside of the besieged cabin. Nearly unparalleled, The Evil Dead's no-holds-barred resourcefulness places it among the masterpieces of the genre.