Shaun enjoys a simple kind of life: a shift on the job, a round of video games with his roommates, a brew at the local pub. It takes the near-destruction of society by the arisen legions of the undead (not to mention his long-delayed dumping by an embittered girlfriend) to wake this chap up to his ingrained apathy and dissatisfaction in life. Shaun of the Dead takes the basic premise of any number of self-betterment tales and sets it amidst one of the horror genre's most tried-and-true formulas, the result being a film that is at once plainly obvious and remarkably sharp-witted, the latter mostly thanks to the film's utter honesty in its exhibition of the former. Initially, this would seem to upset the very root of its satire, immediately connecting the metaphorical dots in presenting its alive-and-well human protagonists as nearly indistinguishable from the rotting zombies threatening to eat their faces. The alternating laughs and revelations, then, stem not from these correlations (which have grown increasingly more difficult to present without lending to tedium, Romero's brilliance be damned), but from their given acceptance and the subsequent attempts to overcome their damning accuracy. In this most apocalyptic of genres, Shaun of the Dead is not unlike a ray of unexpected sunshine - even if it has a little red on it. 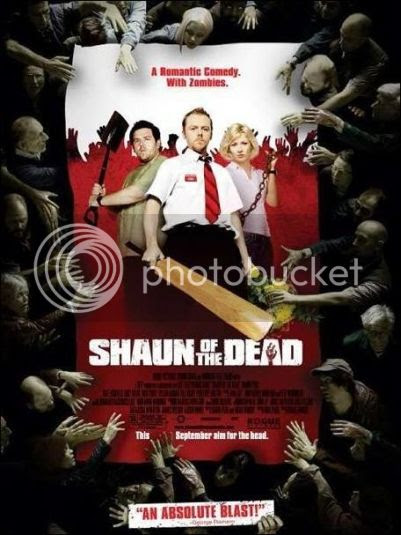 Though leagues apart in their comedic tendencies, the film shares a spiritual kinship with 1999's Office Space, with both Ron Livingston's Peter Gibbons and Simon Pegg's Shaun striving to overcome their reliance on The Man amidst socially-reinforced oppression. Shaun, a man so passive and unaware that he can hardly walk down the block to the convenience store without tripping over himself, is himself stuck in a rut of personal insecurity and employment-based woes; while Ron found his personal freedom through an admonishment of superficial workplace responsibilities, Shaun discovers himself via whacking zombies in the head with a cricket bat. By means of modestly creative framing patterns and editing schemes, Shaun of the Dead milks its chosen dissatisfied-people-as-zombies shtick for all its worth (all the while throwing in a few choice homages to boot, this viewer's personal favorite involving the plan to rescue Simon's mother, the deliberately named Barbara), and though not all of its gags work as intended - a bit where four protagonists impersonate the living dead so as to pass through a crowd of zombies, unnoticed, fails purely for its total abandonment of reason - there's seemingly no limit to Simon Pegg's hilariously inane facial expressions. The genuinely undead help to pry this zombified laborer from the dead-end lifestyle he's come to accept for himself, and Shaun of the Dead, though not without its rough patches, evokes this skewering satire with a rambunctious attitude worthy of the most pointed gadflies.