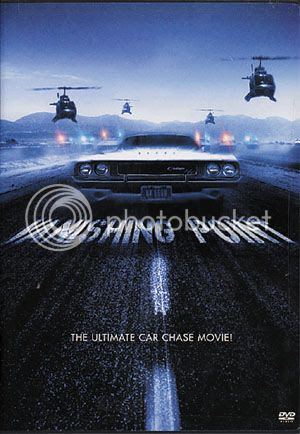 In Vanishing Point, one's car is their life and the open road their freedom. Or vice versa. Either way, the two paired together remain a potent cultural symbol of the roving spirit, an image reignited with the revolutionary swagger of Easy Rider and further solidified by this film's nearly plotless, purely existential conflict of one man's struggle against the oppression of society. Barry Newman plays the otherwise nameless Kowalski ("First, last, and only"), a former policeman and soldier who's now taken almost entirely to the road after having seen entirely too much of The Man and his rotten corruption. En route to San Francisco from Denver in order to deliver a 1970 Dodge Challenger, Kowalski's expert but nonetheless speedy driving results in an attempted pull over that, as a result of his refusal to comply, rapidly blossoms into one of the biggest one-man chases in U.S. history. Like Mad Max, Kowalski is a shell of a man, hardened by his experiences within the authoritarian sect of society as well as the tragic death of a loved one. His personality is ultimately little more than a quotation of the era's counterculture writ large but it is a ravishing one all the same, sublimely complimented by director Richard C. Sarafian's rhythmic shifts between breathtaking wide shots of the barren desert imagery and perspective-reinforcing close-ups of our protagonist and the vehicular extension of himself. Pursuit from the authorities make up the bulk of the film's literal happenings but Vanishing Points' conflict is one of internalized revolution; blind radio DJ Super Soul (a pre-Blazing Saddles Cleavon Little) recognizes Kowalski's righteousness and uses the airwaves to aid his flight whilst also rallying support from his expansive base of listeners, guaranteeing the outlaw's status as a martyr. From the evocative image of a basket full of snakes being released into the wild to the destruction of Super Soul's radio station at the hands of unhappy and racist supporters of the status quo, Vanishing Point is a film all but overflowing with the revolting spirit of the oppressed. Bring the noise!