Over the span of four years, Spanish director Amando de Ossorio created a four-part horror epic rooted in the history of the Knights Templar - a powerful, militaristic sect of Christianity that was persecuted during the dark ages, with many of its members ultimately burned at the stake for various heresies and blasphemies (the validity of which remains in question). Unsurprisingly, his Blind Dead films largely deviate from known history, although the basic core remains the same. As presented in the mythology of the series, the Knights were a deviant religious sect that succumbed to satanic practices in their quest for eternal life, in the process capturing virgins, killing them ritualistically and drinking their blood. Once found out and arrested, they were burned at the stake and their eyes poked out so that, should they indeed come back from the dead, they would be unable to see any more potential victims. The resurrected Knights, then, are the blind dead - silent, skeletal creatures cloaked in ashen robes, hunting their victims by sound and drinking the blood of those unable to escape. 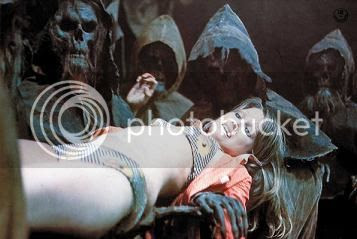 Kudos are due to Ossorio for helping to forge the Spanish horror movement of the 70's, but influence or country of origin notwithstanding, his first two Blind Dead films are but mediocre exercises in schlocky tedium - typical for much of the low-rent grindhouse fare they represent. Their sinister atmosphere and occasionally creepy passages are indicative of mastery of craft on a basic technical level; the location shooting lends an eerie tranquility to the proceedings, while the sound design, often comprised of little more than the groans and howls of the undead atop minimal piano work, is the stuff nightmares are made of. Unfortunately, these memorable technical specs are but icing on a practically nonexistent cake; the films seem to have been built around a singular idea their budgets were unable to deliver at feature length without deliberate padding. Like many of their drive-in brethren, plot is scant and characterizations practically nonexistent, but their ultimate failing comes about not from these low-budget indicators but their inability to either overcome or subvert them. Tombs of the Blind Dead in particular paces along with a sense of business-as-usual obligation when it would benefit most from turning the trash meter up to eleven. Where's Fulci when you need him most?

Though the visual look of these first two Blind Dead films is nothing short of bland - a quality that adds to the general tranquility of its perfunctory plotting - the unadorned style actually lends to the mood when the blind dead are on screen, their creeping menace taking on an antiquated but undeniably physical presence. This is particularly refreshing during Tombs, in which the titular antagonists only make sporadic appearances while the boring human characters - a hilarious love triangle comprised of one man and two women (former lovers in college) - go through the whodunit motions after one of them is mysteriously killed. Return of the Blind Dead sets off more promisingly, though, beginning with a flashback to the original execution of the Knights before resuming in the present day, where the same town now celebrates their former victory over the satanic cult. In a semi-brilliant montage, the villagers set fire to effigies of the knights while the blind dead once again rise from their graves, the reverberations of religious violence throughout history once again manifesting in the present. 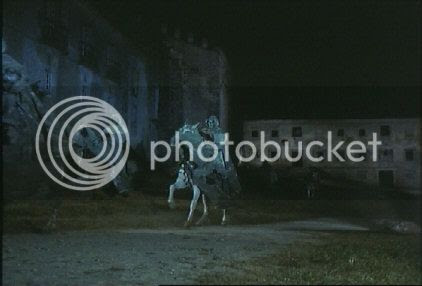 Unfortunately, it's only a matter of time before the film reverts to the pattern of poorly established characters coming to grisly ends, with tasteless shots abound of the Knight's swords penetrating their victim's bodies and cheap audience manipulation involving children in peril. In this regard, the blind dead become little more than a passive force of death meant to tie up the often aimless human drama, which in turn exists only to justify the film's feature length running time. Such general disinterest in character - paired with the sleazy reliance on (relatively tame) sex and gore for exploitative shock value - ultimately makes for a cold and oppressive viewing experience; if you don't get your thrills from watching generally stupid people taking an unreasonably long amount of time to flee from danger, then the film's joys are all but guaranteed to be minimal. That many of these flaws are relative is a fact that points to their overall modesty, and though they make for an interesting look at a key moment in the evolution of marketable horror films (amusingly, Tombs of the Blind Dead was once re-cut and renamed Revenge from Planet Ape in order to cash in on the popular sci-fi series), their worth as living cinematic creations - entertainment or otherwise - remains perfunctory.