A first time viewer might be forgiven for thinking Evil Dead II a work of impossible expectations. About twenty minutes in, the film has achieved so fierce a stylistic velocity that it seems about to drop over dead, as if it had overdosed on caffeine and gone into overdrive during its highly energized death rattle; its brilliance, then, comes in the form of its being able to sustain such delirious energy for an additional hour after this point of apparent exhaustion. The Evil Dead remains the stronger film if only for its relatively straightforward take on the same scenario, but this sequel/remake is something of a masterpiece unto itself; with a substantially larger budget at his disposal, director Sam Raimi essentially remade the film that jumpstarted his career, largely cutting down on the horror quotient and instead recasting the tale as one of frightful slapstick. Laughs notwithstanding, however, the film is just as unforgiving as its darker predecessor; viewers with heart conditions may want to keep their thumb near the pause button, lest their own health be put at unnecessary risk. 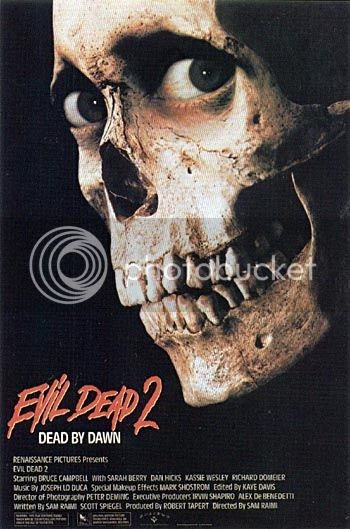 At the films outset, the slate has been wiped clean – in essence, the original Evil Dead never happened as far as this cinematic reality is concerned. Ash (Bruce Campbell) once again finds himself besieged by supernatural forces during his intended getaway time in a secluded mountain cabin, with demonic spirits wrecking his escape route and quickly breaking down the doors to his ramshackle shelter. No sooner than his girlfriend has been zombified than additional soon-to-be victims show up at his pathetic fortress: two archaeologists researching the malevolent Book of the Dead that resurrected the evil spirits in the first place, and two naïve locals hired to lead them to the cabin. In comparison to the minimalist plot of the original, these elements function as little more than decorations to the narrative, although they afford the necessary outlets for the indulgences of style that make up Evil Dead II’s haywire genius. The film isn’t so much postmodern as it is anarchy captured in a bottle, with every batshit crazy sight gag serving to further deconstruct its chosen genre trappings.

Such Tex Avery-inspired whimsy takes on many forms in Evil Dead II’s seemingly endless visual barrage, although none may be more delirious than a physically collapsing Ash forced to reckon with his own possessed hand, both as a still-attached extremity and, later – thanks to his ever trusty chainsaw – as a detached limb with a life of its own. Evil Dead II’s tendency towards self-references might have been knock worthy were the film not so regularly on the money; truly, Ash may be the grooviest of modern horror heroes, particularly with his makeshift chainsaw-arm and boom stick in hand. Such everything-and-the-kitchen-sink aesthetics, however, don’t prevent the film from maintaining the modest B movie craftsmanship of its predecessor, as Evil Dead II isn’t afraid to leave things a little rough around the edges. Such imperfections – like the roughly hewn projection effects of the final act, as well as some sketchy stop motion zombie animation – instill the film with creative, soulful fingerprints, while the sheer volume of highly noticeable continuity errors, whether intended or not, become a running gag all to themselves. Ultimately, the film is so impressive that it’s structural indebtedness to the enjoyable but inferior sequel Army of Darkness comes as something of a disappointment, if only because the open-ended conclusion is not unlike the tiniest leak in a wonderfully overstuffed bag of goodies.