It would seem to be a natural human desire to revisit a loved one after their having departed this world. In They Came Back (Les Revenants), virtually everyone in the world is suddenly confronted with this notion as a full-blown reality when 70 million of the recent dead (more or less everyone to die in the past ten years) rise from their graves, a little slower and a little colder (their body temperature being five degrees lower than normal) but otherwise in full health. The word “zombie” is never mentioned but all the same the living begin to suspect the intentions of the “returnees”; are they truly themselves, walking and talking like they used to, or are the simply mimicking the behaviors of their former lives, perhaps as a mask to some darker conceit? It’s a mark to writer/director Robin Campillo’s singularity that They Came Back only incidentally recalls the works of Romero (the shots of the slowly returning dead marching through the city streets eerily recalls the opening of Day of the Dead), for his film is one of primarily intangible horrors. The living dead may not be an immediate threat, but outside of their tucked away graves they remain a constant reminder of our imminent mortality. 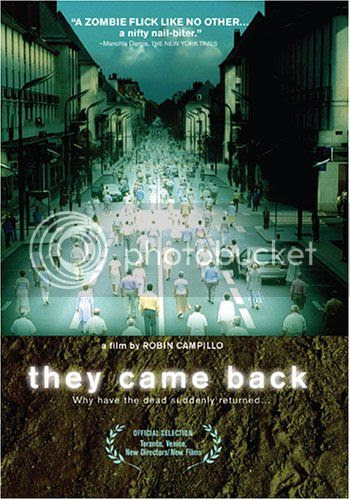 In different hands the film could have easily been a satire, but Campillo knowingly plumes the humorous aspects of this scenario without losing sight of these ethereal ruminations. Officials needn’t worry about body counts when the dead return, just unemployment, for the returnees wish to go back to their former lives almost as if they’d never left them. Research is inconclusive but the dead seem connected by an invisible communication system, while any attempt to converse with them regarding their death or the time since then proves futile – they seem only able to function through the details of their past, their bodies continuing to live but their spirits locked away in some irretrievable time capsule. The living, all the while, strive to cope with this profound event, with husbands returning to their wives and children returning to their parents, the grieving process begun anew in an unnatural infusion of emotions across the spectrum. Campillo regards the isolation of these souls with breathtaking long shots, while the use of infrared cameras to differentiate between the living and the returnees allows for some otherworldly evocations of this newfound example of “us” and “them”. His camera seems to deliberately circle around death, examining it from every angle. They Came Back’s narrative doesn’t deviate far from the initial establishment of these developments but its exploration speaks volumes as to the existential necessity of our ability to differentiate between life and death (with apologies to Terry Shiavo). Here, the living may ultimately be the true zombies, while the dead seem to have been better off wherever it was they came back from.