As one of the last zombie productions before George Romero revolutionized the genre with Night of the Living Dead, and as the only work of the genre ever made by the infamous Hammer production company, The Plague of the Zombies is a prime example of routinized filmmaking done right. Sir James Forbes (André Morell) - a renowned professor and medical practitioner - receives word from his long-time colleague Dr. Peter Thompson (Brook Williams) concerning the strange deaths taking place in his remote village, and subsequently travels there with his daughter Sylvia (Diane Clare) to investigate the inexplicable happenings. Townsfolk have been dying left and right, apparently from total lack of physical cause; upon further investigation, the coffins of the departed are discovered to be empty one and all, and no sooner than the latest victim of this unseen plague is laid to rest is his decaying body reported walking about. The film establishes this scenario with grim efficiency, its dense scenery populated by creepy background/foreground contrasts and a perpetual sense of unease seemingly ingrained into the landscapes. These developments are predictable in the technical sense of the word but the film approaches them with an earnestness that offsets their familiarity; Plague of the Zombies is no tour-de-force, but its investment in its material is commendable. 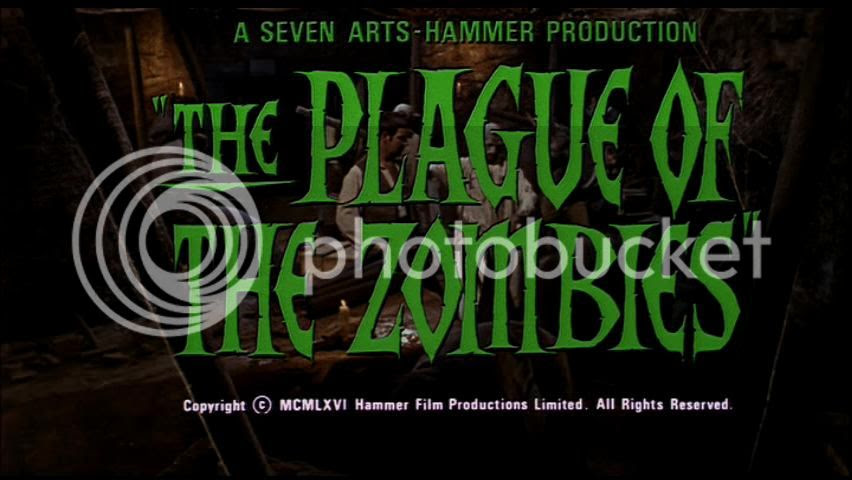 Along with its simple yet propulsive plot, the film unfolds as a series of intriguing contrasts: between life and death, male and female, tradition and modernity, science and voodoo. As is largely typical of the genre, it is ultimately revealed that the undead are used for slave labor, here put to work in local tin mines and beaten as they carry out their grim duties beneath the earth. Their master - having mastered voodoo practices during his time abroad in the Caribbean - uses his methods both to raise the dead and torture the living. (It amuses me to no end how far the antagonists of horror films are willing to go to acquire cheap labor; are reasonable working hours and medical plans that much of a burden to bear?) The film's visual palate remains both formal and earthy, lending an unsettling tone of moral decay bound to infect anyone unwary enough of the danger that abounds, while one choice sequence employs a disjointed style that emphasizes the otherworldliness of its life-after-death spiritual conflict. The whiff of mystery that hangs over the proceedings is not unlike the lid on a boiling pot, with the narrative uncoiling at a teasing, deliberate pace. Plague of the Zombies hardly touches upon virgin territory but its meaty indulgences are full of life and excitement, inviting the audience to share in the character's sense of investigation and discovery. Among the ranks of whodunit B horror films, this one stands out.