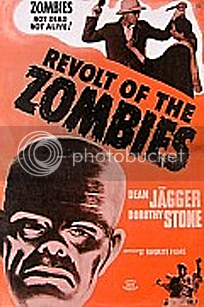 Far more talky melodrama than would-be chilling horror, Revolt of the Zombies bore witness to the Halperin brothers attempting to reproduce the success of their previous film, White Zombie, to minimal effect. Sans similar subject matter, the same directing/producing team, and even the identical image of a pair of penetrating eyes employed throughout, this latter film fails to recapture the stark moodiness of the 1932 classic, in part because of the absence of the inimitable Bela Lugosi but more substantially because of it's obvious role as an attempted cash-in on the wave of Universal's successful horror franchise. Playing out as a barely-there soap opera with superstitious underpinnings thrown in for good measure, the film concerns the love triangle that develops between two archaeological experts and the woman they love. After losing his fiancé to the dubious swooning of Clifford (Robert Noland), Armand (Dean Jagger) in turn loses himself to the pursuit of a mystical power that allows its possessor to maintain absolute control over his chosen subjects; already used by a Cambodian priest to aid allies in the trenches of WWI, these hypnotized zombies are powerless to the will of their master and seemingly invincible in the face of the slaughter of battle. Once able to impose his will on others at a moment's notice, Armand plots to remove all obstacles between himself and his love, Claire (Dorothy Stone), whom he cannot bear to manipulate against her own will.

Like many films of its time, Revolt of the Zombies is scant in both production and plotting but trades quite deliberately in sweeping moral gestures; Armand's love for Claire is untrue so long as he puts his own feelings before hers, while it is his own revelatory willingness to grant her heart's desire that proves to be his tragic undoing. These are all notions, however, largely plodded through by the one-note narrative, which stretches itself thin through uninspired patches of melodrama in search of atmosphere or genuine emotion. Quite blatantly a product of its time, the film largely equates the mystical powers of the zombies with the unknown inherent in foreign, non-Caucasian cultures (one character amusingly states that the zombies will prove to be the "undoing of the white race"), while the subjugation of women is a purportedly necessary manner of behavior implicit beyond the basics of the plotting. A handful of scenes strike of menace or tragedy but the production nary overcomes its own sense of obligation, its performers unable to capture the sense of sincere expressionism that might elevate their typically petty banter to that of long-preserved human interaction; the film maintains contentedness but never rises above the attitude of "good enough" hackery. As such, then, Revolt of the Zombies is little more than an interesting, if unexciting, footnote of its time.