Jean Yarbrough would never aspire to aesthetic greatness in his career but his skill behind the camera as a man of basic technical know-how made him something of a commodity for studios relegated to poverty row. A master hack for his time, his works forgo the connective tissues of continuity, logic, or other details whenever such would have impeded on either budgetary restrains or studio-mandated deadlines. This relegated him to quickie films typically lacking in artistry, but there's a genuine earnestness and humility inherent in his work that sorely lacks in the majority of his modern equivalents; rather than gorging on excesses, his films admirably find craft out of practically nothing. King of the Zombies is such a work of slapped-together, audience-pleasing basics, seemingly shot in less than a week and edited together in just over an hour, its aims low and its successes modest (it is worth mentioning, however, that Edward J. Kay's score earned the film a surprise Oscar nomination). But a handful of sets and a few actors - not to mention a running time of under 70 minutes - allow for little in the way of subtlety or characterization, but the film entertains in its own sheepish way, even if it is more interesting as a historical and cinematic time capsule than as its own intended entertainment. 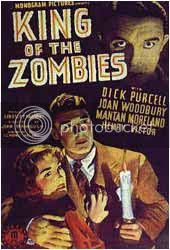 Flying over the Caribbean in search of a missing war comrade, lost in a storm and low on fuel, three Americans - James (Dick Purcell), Bill (John Archer), and their manservant Jefferson (Mantan Moreland) - crash land on an unknown island after picking up on a lone radio signal. Below, they discover the mysterious Dr. Mikhail Sangre (Henry Victor), an Austrian who lives in a mansion on the island with several family members and a handful of servants. Given that one of Dr. Sangre's guests is limited to walking around in a catatonic daze, James and Bill suspect strange going-ons but dismiss the apparent ramblings of Jefferson, who claims to see zombies and ghosts throughout the mansion. Ultimately, though, they discover that the doctor does in fact command a small legion of zombies, having manipulated them with voodoo rituals so as to extract key political information from his prisoners - specifically, details concerning the Panama canal, a key American military concern of the time.

As suggested by its connect-the-dots plotting, nary a moment of King of the Zombies isn't bare to the bone, although the film is one quite satisfied with its own minimalist exercises. Ultimately, it is more of a comedy than a horror, with the skittish antics of the inimitable Moreland taking center stage as he gets riled up over every minute happening and unexplained shadow. A whiff of racism lingers over the film during these more purportedly PC times but Moreland's oft-reviled comedic style is not unlike a one-man Abbot & Costello routine, his snappy delivery of dialogue and subtle gags of body language sporadically amusing - if a tad dated - in their execution. Any cultural condescension is ultimately innocuous, while Moreland's own performance subverts any malicious intentions; although his jittery silliness is often the source of intended laughs in contrast to the staunch seriousness of his white superiors, such floundering often provides the inadvertent solution to whatever problem lies at hand. Such talent is often unappreciated given its context in the ensuing civil rights movement of the time, but Moreland's precision remains a key stepping stone in the history of black cinema, one that proved the high point of many an otherwise dull film, King of the Zombies among them.