The Return of the Living Dead starts off as a great throwback to earlier texts of the zombie genre; the only real disappointment is that, in the end, it doesn't throw back quite far enough. Opening exposition recasts the plot of the original Night of the Living Dead as a real-life crisis resulting from government testing gone awry, with crucial details concerning the cause of the reanimation changed so as to aid in the general cover-up (instead of government chemicals, it was radiation from outer space). Turns out that some of the reanimated dead were accidentally shipped to the biomedical supply warehouse were Freddy (Thom Mathews) has just gained employ, having silently rested in their government-produced containment canisters for over 20 years in the relatively unused basement... until now.

No points for guessing that this warehouse lies right next door to an ancient-looking and generally unkempt cemetery, but Return of the Living Dead is a film that trades guilelessly and joyously in such deliberate and obvious nods to the conventions of horror films past, albeit with its own nasty twists. Knowledgeable viewers will quickly pick up on a number of anachronisms inherent in the film's justification of it's movie-indebted plot, but given the film's cheeky, rock-out tonalities and playful reworking of Romero mythology (here, a bullet to the head of the dead is worthless; even if you dismember one of them, individual limbs will continue to squirm after you), this can be read as something of a postmodern, alternative universe to that occupied by more traditional films of the genre. Return is drenched in 80's pop goodness, from its indebtedness to Cold War cynicism (most notable in the film's nihilistic conclusion) to the rebellious spirit of the period's anti-Reagen angst (in the film's most iconic sequence, babe Linnea Quigley's aptly named character "Trash" strips whilst dancing atop a prominent tombstone). 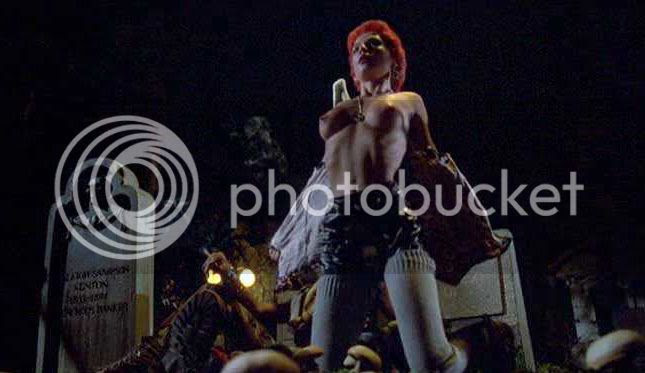 After Freddy's initial infection, the shit really hits the fan when a resuscitated corpse is disposed of via incineration, the poisonous fumes returning to earth in the form of an acid rain that quickly creeps its way underground to the decomposing departed. The zombies here are more than the seemingly mindless drones of its chief inspiration; despite the general absence of lips or tongues, they're somehow capable of speech, while their longing to consume human brains is cheekily reveled as a means of dulling the pain one feels from being dead. By casting its central characters as the anti-establishment type, Return of the Living Dead effectively announces itself as a horror movie deliberately pitted against customary cinematic values, a fact that sees even the most likable of characters regularly given up for horrifying ends and the overwhelming theme of the genre as a whole - that being, we're totally fucked - ultimately taken to the nth degree. One senses that the film could have gone further given the potential of its initial set-up, its snarky attitude ultimately becoming lost amidst a somewhat monotonous narrative. Then again, how much more can one ask of a film that has the audaciousness to include a reanimated half of a dog?