Undead aims to entertain by means of cheesy, cartoonish thrills, but like its characters almost complete inability to use the weapons and ammo allotted to them, it rarely - if ever - hits the mark. Theoretically, it's a great (if familiar, a la 1984's Night of the Comet) concept: the trail of debris from a passing comet makes its way to earth's surface (specifically, a single rural town in the middle of nowhere), infecting anyone unlucky enough to be standing at a point of impact, turning them into a mindless zombie of the crunch-n-munch kind. Add two heapings of tongue-in-cheek satire, mix, and serve. This should have foreshadowed the following year's Shaun of the Dead, but rest assured, the zom-com that garnished all the popularity was without a doubt the one most deserving. The problem here is a simple but all-encompassing one: the sibling directorial duo of Michael and Peter Spierig have next to no idea how to fit all their pieces together in the most remotely logical or satisfying fashion. 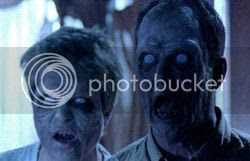 The film's smorgasbord of styles, genres, and far-fetched plot contrivances (for starters, aliens are involved) is fine unto itself and would go down much more smoothly if the whole thing didn't suggest a joke you had to be in on in the first place. Something is wrong when the only entertaining moment of a film comes from the scene involving a rabid, zombified fish (and, hilarious though it may be, it doesn't make the rest of the film remotely worthwhile). Sorely missing from the film's loony would-be insanity is a sense of focus; its construction is too slipshod and random to be effective as anything other than flat, uninspired zaniness. Undead is an exercise in absence; its humor is deprived of rhythm, buildup or payoff, while the so-called action quotients want for a sense of placement, progression, or even the possibility of actual danger coming to its characters (who fall into one of two categories: the wacky ones who do stupid things and die, and the staunchly serious ones with no personality whatsoever). It's hard, if not outright impossible, to invest in this mess on any level. Undead isn't a joke - it's a punchline. Where's the setup?