(AKA Treasure of the Living Dead, Blood Suck Nazi Zombies.)

Oasis of the Zombies deserves some sort of eternal recognition in the annals of cinema if only for it's brilliant alternate title, Blood Sucking Nazi Zombies. The film itself, however, largely fails to live up to such kitschy promise, and for the most part is a fairly typical entry in the legions of cobbled-together B-movie horror films. The plot is built almost entirely around the concept of zombies in the desert; here, dead Nazi soldiers guard an abundance of gold, lost during WWII when their convoy was ambushed by British soldiers at a secluded oasis. Told largely in flashback, the generally one-note story concerns Robert Blabert (Manuel Gélin; as regards memorable names, this is just the film that keeps on giving), a college student who learns from abroad of his father's death. Scouring his father's diary, Robert learns of his birthplace in Africa and the legend of the lost gold, and decides to travel there with several of his friends to look for the estimated three million dollars worth of treasure. 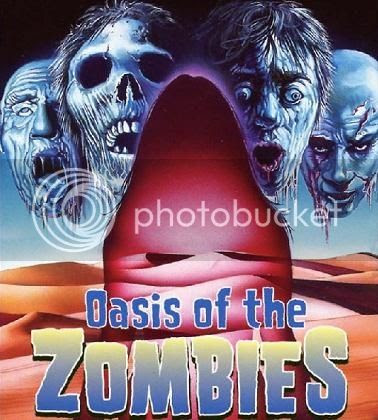 Oasis of the Zombies' general plot is testing for even seasoned watchers of bad B-movie cinema - when locals warn the students about the undead guarding the oasis, the story is reduced to pure mechanics - but here, the zombies themselves are the real treat. Worm-eaten and occasionally comical in their rotten expressions, they echo Fulci's earthy creations but radiate their own sense of creeping menace. The harrowing finale longs for a better film to be featured in, and on its own warrants a recommendation; as darkness falls, dozens of zombies rise from the sand to encircle the pillagers in their midst. Employing creepy (if inconsistent) nighttime cinematography and a repetitive, chilling score that suggests a wind tunnel from hell, the film takes on a hallucinatory tone of deprived madness as the zombies carry out their unstoppable march. Franco's resources in creating the living dead were obviously limited (when the zombies tear into their victims, the gore is almost always kept awkwardly out of sight), but his command of audio/visual augmentation is a force to be reckoned with.