Only in theory does Joe Dante's subversive brand of satire effectively compliment Homecoming's schlocky horror premise. This sixth episode of Showtime's "Masters of Horror" series (adapted from Dale Bailey's short story "Death & Suffrage") sees the deceased soldiers of a certain war on terror resurrected when right-wing pundit David Murch (Jon Tenney) states during a pre-election debate that he wishes they could come back to life, if only to tell us how proud they were to give their lives for their country. Murch enjoys a small wave of empowerment after his manipulative (and blatantly dishonest) comment, but it isn't long before the recently deceased indeed begin rising from their premature graves - to vote. As if suggesting a spiritual victory over the silencing power of the government-controlled media, they stammer along for as long as it takes them to fill out their ballot card, only to die yet again after having finally made their voices heard. Initially, the Republican incumbent team is ecstatic at this newfound, flag-waving opportunity to rally support for their side, until it becomes apparent just what the returned soldiers think of the current overseas conflict. 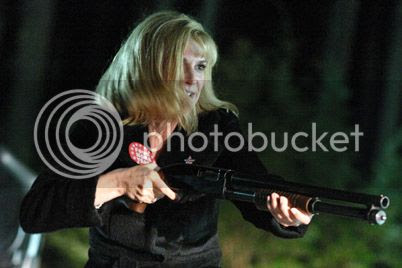 Homecoming wisely permits its allegorical gestures to remain broad in nature; the War in Iraq and Dubya himself remain elements obviously alluded to but never named outright, ensuring that the prominent themes of government oppression and the manipulation of information extend beyond the specific examples provided by our current historical moment. Unfortunately, it is a work that lacks conviction behind its caricatures and suffers from its subsequent unevenness. Though Dante quite blatantly preaches to the liberal choir here, many of Homecoming's illustrations hit a critical and illuminating nerve that reaches beyond partisan squabbling; the image of soldiers rising from flag-covered coffins is a powerful evocation of post-9/11 sacrifice and loss, while the zombies themselves come to embody the feelings of betrayal at the hands of deceptive and incompetent leaders. Their plight, though specific to the sacrifices still being made overseas, mirrors the day-to-day struggle of every politically aware citizen; when asked by a ruthless interrogator as to why he remains silent, one of the returned soldiers states simply, and with much effort, "Hurts."

It's all the more unfortunate, then, that Homecoming trades by and large in the kind of easy swipes that define the political voices it aims to disempower. While David Murch retains a bland conscience as necessitated by his main character status, his political and sexual partner Jane Cleaver (Thea Gill) is served up as little more than an off-the-wall parody of Ann Coulter who trades in reductive sound bytes and bitchy propagandistic attitudes, lambasting the radical in public but hypocritically indulging into kinky sexual activities behind closed doors. Far-left liberal though this critic may be, it's disconcerting to see any group reduced to the worst of their elements (an unfortunately common trait in our historical representations), the excessiveness of which here undermines any serious attempt at unpacking deeper meaning in our Red State/Blue State conflicts. Homecoming is ultimately more inwardly bipolar than outwardly malicious, a quality best seen in its humanistic look at the thwarted sacrifices of our men in arms. Too bad, then, that it's all tied together with what amounts to little more than playground name-calling.