Take it for what it is. Planet Terror - Robert Rodriguez's contribution to his Grindhouse collaboration with Quentin Tarantino - is a first-rate homage to the schlocky, sleazy B-movies of decades past, loading on the gore, clichés, and self-referential dialogue like there's no tomorrow with a cascade of influences from John Carpenter, James Cameron, George A. Romero and Lucio Fulci (just to name a few), all the while topping off its gimmicky (though totally effective) construction with countless scratches, blips, audio/visual inconsistencies and even a carefully placed "missing reel" in its loving ode to the almost lost end-of-the-line theater experience. Multiplexes have sucked the personality right out of most of our collective viewing experiences and Planet Terror effectively recreates such memorable and meaningful imperfections, if only on a superficial level. For the record, I always liked the blips and scratches, and no matter how many times Carmike plays that fucking "digital experience" clip, any movie shot on film is going to suffer when it's projected with our current digital technology. Rodriguez and Tarantino know there's more to cinema than the supped-up technology adored by the likes of George Lucas and Michael Bay, and in its best moments, the film beckons us to return to our roots. 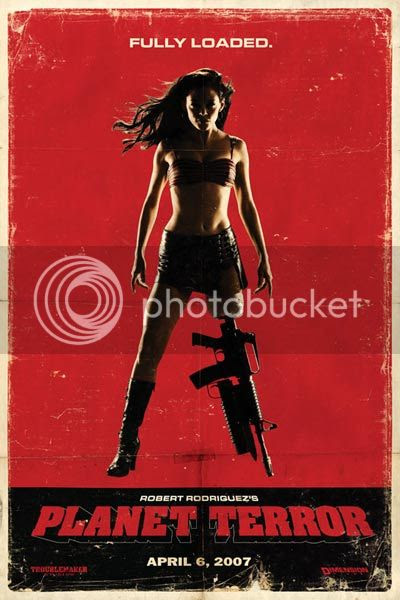 The only real problem, then, is that the film doesn't really do much more than that. Sure, it looks cool. Sure, it's hella entertaining. I've seen it three times and enjoyed it continuously, albeit to decreasing returns. Any work has the potential to lose its potency once it becomes overly familiar, but whereas the great genre pieces of the past - Assault on Precinct 13, Night of the Living Dead, Escape from New York, The Terminator - all worked layer upon layer of moral and philosophical quandaries into their viscerally charged storylines, allowing for repeated viewings of notably increasing returns, Planet Terror is ultimately little more than a collection of cinematic quotations thrown into the melting pot with the heat turned up to eleven. Such relative triteness is legitimate because Rodriguez doesn't aim to pass his homage off as anything but, a necessary modesty that ultimately lends itself a kind of superficial sweetness that might otherwise smack of genuinely hollow emotions. Jeff Fahey and company aren't embodying cinema as persona in the same vein as the performers of Kill Bill or his own Sin City - they're going for the purely stylistic gut of their archetypal forefathers and hitting the nail smack on the head. Like most of Planet Terror, this limits their capacity for actual feeling, but they manage to kick plenty of ass nonetheless. 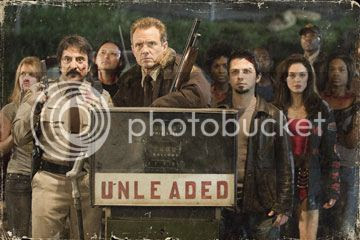 The film's general plot has been detailed extensively on this blog before and needs not be recounted here again. Needless to say, it's melange of junk drawer B-movie parts - the heroic outlaw, and experienced and cynical cop, the brothers divided against each other, the heroine out to prove herself - penetrates directly into the heart of our cinematic subconscious, with Rodriguez trading in deliberately iconic imagery that simultaneously echoes and redefines our genre-based customs and traditions. A sexy, jazzy pole dance opens the film like a sizzling flash of sweat and sleaze, complimented quite perfectly by Rodriguez's own guitar-wailing score. Rose McGowan's same character - cheekily named Cherry Darling - will later lose her leg to a batch of mutated flesh-eating zombies, only to have it replaced by a combo assault rifle/grenade launcher, the centerpiece image in the film's glorious onslaught of heteronormative indulgences of the self-aware and completely shameless kind. From Cherry's ex-lover El Wray (es embodied by Freddy Rodríguez) to the inclusion of makeup guru Tom Savini in the cast, these touches condense the culture that inspired them into a kind of postmodern madness designed to temporarily overload the senses. Planet Terror purports to be stupid and shallow but it is incredibly smart in how it navigates these terrains, proving once again that a little irony can go a long way.