Jim (Cillian Murphy) wakes up in an empty, ransacked hospital, four weeks after being admitted for the injuries he sustained in a car accident. Staggering around, dazed and starving (he finds sustenance from the few remaining Pepsi cans in the otherwise destroyed vending machines), he ventures outside, where the world seems to have ended during his extended sleep. Trash and destroyed vehicles litter the streets of London, and though seemingly countless fliers abound in the search for lost friends and loved ones (one of many touches echoing the days following 9/11), not a soul is to be seen. Returning to his regularly visited church (scrawled on the wall, possibly in blood, reads "REPENT/THE END IS/EXTREMELY/FUCKING/NIGH"), Jim finds the pews littered with dead bodies, and - upon making his presence known - twitching, zombie-like beings which quickly begin their pursuit of the newfound potential prey in their midst. Our confused protagonist only escapes by the help of two more heretofore unknown survivors, who repel the bloodthirsty figures with Molotov's before returning to their hideout quarters.

So begins Danny Boyle's harrowing 28 Days Later, albeit not before a prologue that sets up the cause of this terrifying scenario. A group of animal rights activists break into an animal testing facility with the intention of releasing the seemingly helpless creatures, only to realize, too late, that the pent up monkeys are in fact host to a volatile virus known only as Rage (an act that suggests the destruction wrought by misguided religious fundamentalists). As with AIDS, this epidemic first came from the primates, and quickly did mankind's world fall to the unsympathetic whims of natural disorder. The film itself seems to exist in a state of perpetual imbalance, teetering on the edge of many states - between life and death, the real and the surreal, civilization and chaos, just as its characters struggle from place to place, relying on their wits, luck, and each other. Until human emotion has room to foster once again, surviving through the night until tomorrow is truly as good as it gets in this wasteland.

Employing a hazy, grainy video stock, the look of 28 Days Later seems manifest of the collapsing social and moral structures its characters are forced to reckon with. Those infected with the rage virus are reduced to spastic, cannibalistic monsters within the half-minute, often forcing the uninfected to ruthless, inhumane acts lest they become victimized as well. Boyle's creatures may not be zombies in either the traditional dead-coming-back-to-life sense but their ultimate nature is tantamount; they embody our willingness to succumb to drugs and unexamined beliefs, while their sole instinctive purpose (that being to eat/infect anyone who isn't already amongst their ranks) strips away the formality of a civilized world, thus exposing the carnality that lies within all of us given the proper triggers. The line between the humans and the others has been even more blurred here, thought it isn't long before their flesh-eating compulsions take a backseat, narratively, to the antagonist that is man's oft-used capability of destroying himself. 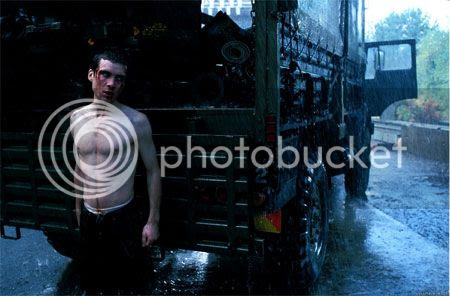 Structurally, the film is a near-perfect example of economic storytelling, with Boyle's style complimenting and building upon his subject matter without dampening its mounting tension or emotion while the script knowingly focuses on character relationships and personal backgrounds without ever falling into the pitfalls of easy setup/payoff connections or condescending exposition. Jim returns to his home to find his mother and father having committed suicide via pills rather than turn into one of the infected, the intimate pain of the scene expressed not through what we've been told but what's been painfully implied. Such tender touches render the film's visceral quotient even more intense and the unavoidable loss of life devastating when it comes.

The momentum yielded by this approach helps immensely during the final act, in which the script unfortunately boxes itself in, a dramatic downfall but, given the nature of the material, perhaps a thematic necessity. Our surviving protagonists have made their way to an army outpost, first discovered via a recorded radio broadcast, advertising the soldier's fortress as holding salvation from the infection. Food and weapons abound but the remaining soldiers have long since lost their own moral perspective, viewing their newfound female guests not as fellow humans to survive with but sex toys meant to give meaning to their otherwise pointless lives (one on their ranks protests but is quickly executed lest he stand in the way of the glorious snatch). Jim is reborn in semi-Apocalypse Now style as man's conflict with himself all but destroys his potential for survival. The infected may have wiped out most of the population, but their deeds, being instinctively driven, are not evil; man, on the other hand, kills himself out of greed and selfishness, all but destroying his chances for survival. 28 Days Later's brooding philosophy is effectively summarized in one character's nihilistic observation, as regards the prospect of returning to a normal, pre-infected world: "If the infection wipes us all out, that is a return to normality."