Zack Snyder's zombies are like his stylistic flourishes: big, dumb, and obvious. Which isn't to say that either is totally lacking in fun or worth. This Dawn of the Dead is, at least theoretically, a more preferable kind of remake than one that simply regurgitates the storyline of the original, superficially updating it technologically while failing to add to the texts that have come beforehand. Rather than attempting to one-up or simply duplicate the 1978 film - an impossibility and a futility, respectively - Dawn 2004 reinvents its source material, here channeling Romero's satirical, restrained gore into a full-fledged action film. Whereas the elder zombies lurched, these fellows sprint like trained athletes - an illogical attribute, given they're supposed to be dead and rotting, but one we can grant given the generally fantastic nature of the genre (one could endlessly quibble over the physical makeup of the zombie - are they actually dead, or simply infected a la 28 Days Later's rage virus? - but let's focus on aesthetics). 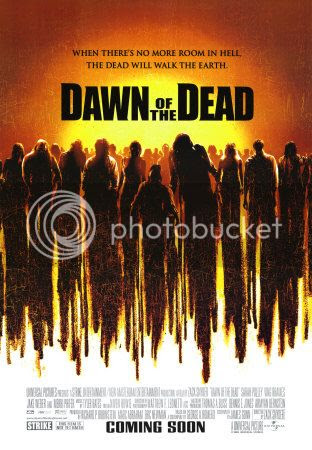 Unfortunately, even unto its own newfound set of completely different standards, this Dawn is heavily lacking, and - ironically enough - may have been a better film had there been less effort put forth on the part of its creative forces. Snyder's intentions are of the inoffensive and purely entertaining sort, but his style is nothing short of fascistic; this Dawn of the Dead almost literally force feeds its fun to the audience, dishing its characterization and exposition out with an matter-of-fact attitude totally free of irony, jumping from visceral peak to peak in hopes of wearing out the audience like a nonstop roller coaster. It isn't enough that you could be entertained, you must be, and Dawn of the Dead is absolutely terrified of letting the attention of the audience wander for even a second. Truly, it is film manifest as industry over art, but at least it is honest enough to not pose as anything more than the slick piece of production it proudly lays claim to.

In this regard, this Dawn of the Dead is sporadically entertaining but also disappointingly fleeting; the characters are emotional vacuoles and the undead but Olympic sprinters with bloody makeup on, lacking not only personality, but conviction. The unfolding carnage is often arresting but it strikes only in the moment (as noisy spectacle often does), the film's establishment of locations and moods too scant to leave any lasting impression; we never truly feel that this is the end of the world, and thus the undead become not an overwhelming force to be reckoned with but a pesky special effect that a few cardboard characters succumb to every now and then. Snyder's style alternates between jittery camera work and static, slow-motion shots of Really Cool Things Happening, a distancing approach that reveals his total lack of investment or concern for the events being portrayed. But hey, it looks cool, right? 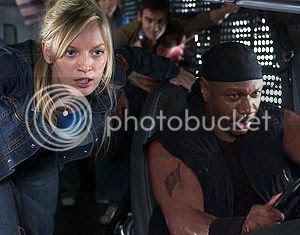 Dawn of the Dead isn't so much a movie than a cinematic model kit assembled step by step, line by line, and while James Gunn's reworked screenplay follows the core of Romero's storyline verbatim, the film only effectively reworks its predecessor once, in a hilarious mid-act montage that plays up the film's witty pop culture awareness. This sequence - which employs a lounge act cover of Disturbed's "Down With the Sickness", a clashing musical choice that effectively underscores the nasty wittiness of the images on screen - truly gets at the film's superficial would-be appeal, but it's also one largely lost on the its smarmy callousness. Only one human death is meant to convey any sense of sorrow - a father, infected and soon to be undead, says goodbye to his daughter - but Snyder's attitude is mandated and disingenuous. How are we supposed to care about who lives and dies if the film we're watching clearly doesn't in the first place?

This sense of sleek nastiness might have been something, though, had it grown beyond mere posing, the many shocks and twists to the plot but simple button-pushing given the general transparency of the film's human components. Parallels are drawn between its own unfolding destruction and the theological ravings that 9/11 was brought about by immorality in America, but like so much else in the film, it's an empty shout-out lacking a sense of inquisitiveness or weighty morality (truly a disappointment, given what Romero could have done with the idea). Its machine lacks ferocity, and while Snyder's advertising aesthetics don't lack for immediacy, they look and feel (or rather, don't feel) less like a movie made by human hands and more like a feature length advertisement endlessly tweaked for mass appeal.