When I first saw Lucio Fulci's Zombi 2 some three years ago, I hated it (or, in the Ebertian oeuvre, I hated hated hated hated hated it). What was this abomination, ruining my beloved Romero lore with its non-plotting, character-less, poorly edited, excessively gory exploitation garbage? It's almost complete lack of narrative cohesion offended my deepest sensibilities, and the flaunting of rotten corpses and festering bite wounds only worsened the offense. The time since then has seen plenty of changes in my perspective, and Zombi 2 has been one of the key films in highlighting what I can only hope is my continuing growth as a lover of the medium. The once singularly championed virtue of plot has since come to share generally equal ranks with the elements of mood, rhythm, integrity, and pure, ribald entertainment, all necessary viewing lenses one will need if they wish to appreciate everything cinema has to offer. 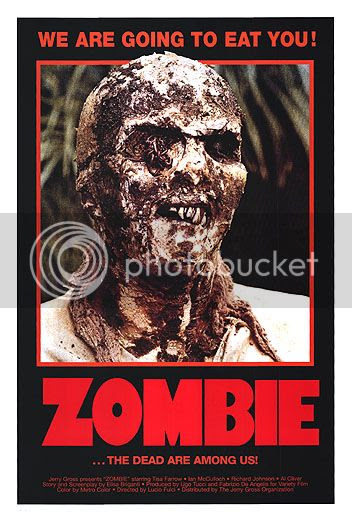 Revisiting the film again, it's abandonment of generally accepted cinematic "necessities" is in fact the key to it's semi-brilliant indulgences into monstrous spectacle. Zombi 2 (named such so as to piggyback on the success of Romero's own Zombi, the Italian title for his Dawn of the Dead) is an exercise in what comes close to pure payoff, its sense of exposition and buildup little more than a formality, albeit one it churns through with a nasty sense of foreboding and its tongue more than slightly in cheek. With a matter-of-fact, unembellished visual perspective, Fulci establishes his scenery as a dense realm of festering disease and steadily encroaching death (the frame itself seems a suffocating force), with even the most banal of dialogue given a weary, tropical menace. Here, four people travel to a secluded Caribbean island in search of a missing person, only to discover the desolate spot of land host to the recently arisen dead. 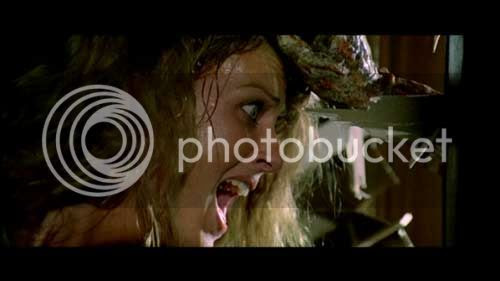 This deliberate narrative minimalism makes way for a raw, nightmarish visual palate. Fulci may not give much of a damn about transition or pacing (or even continuity) but his eye for disturbing scenery - stealthily complimented by a few choice zooms, pans, and creepy zombie point-of-view shots - is nothing short of masterful. One character's terrifying death one-ups Un chien andalou in the film's most squeamish sequence, while the underwater fight between a zombie and a (real) shark remains an audacious move yet to be topped by anything in the genre. These zombies may lack the daffy personality of those from Dawn of the Dead but they certainly don't want for physical repulsiveness; rotting corpses, complete with wormy complexion, rise silently out of the earth before hogging the camera with their decomposing grimaces. The film is shamelessly trashy but all the better for it, with the haunting, muted score by Giorgio Cascio and Fabio Frizzi acting as connective tissue throughout. Although goremeister Fulci would make far more violent films during his career, Zombi 2 may be his best simply for its propulsive, grizzled thrust.