Much has been written about George Romero's Dawn of the Dead – more, perhaps, than any other horror film ever made, given its much-deserved critical/cultural standing and expansive opportunities for academic investigations. Night of the Living Dead was a hit upon its initial release but its success came slowly through word of mouth on the nickelodeon circuit. Ten years later, Dawn of the Dead was ready to capitalize on its predecessor's already extensive influence, and thus a brilliant film was granted the luxury of finding its audience immediately. I myself have seen the film around a half dozen times or so over about ten years, first renting it sometime during my pre-adolescence, after having been blown away by the bleak, unflinching terror that was Night. My initial experience with Dawn remains something of a blur; gore and blood abounded, for sure, and given both my age and the still-potent trend setting nature of the film, my sense is that it was something of a sensory overload (and to think it was on a scratchy old pan-and-scan videotape). 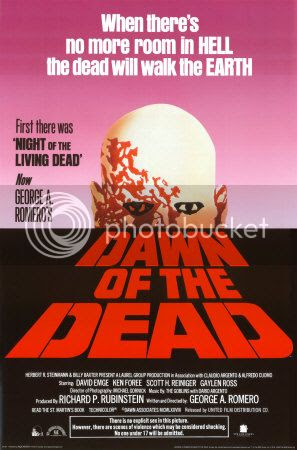 Very clear, though, is my memory of the film's most infamous piece of dialogue; though I myself am not as huge of a supporter of the film as many are (though a near-masterpiece, it is easily my least favorite of Romero's original trilogy), I believe it contains the finest single moment in the director's zombie pantheon. Fleeing the metropolitan areas overrun by the exploding zombie populace, our protagonists land their helicopter at a shopping mall in search of food and supplies, only to find the place overrun with the mindlessly wandering undead. Wonders Francine (Gaylen Ross), "What are they doing? Why do they come here?" With a dry wit that even he may not be privy to, her boyfriend responds: "Some kind of instinct. Memory, of what they used to do. This was an important place in their lives." Even at the age of ten, I recognized the implied criticism of meaningless reliance on commodity to define oneself, even if the concept itself was temporarily beyond my articulation.

Watching the film once again, Romero's carefully calculated deconstructions on social woes of the time seem most brilliant in their simultaneously identifying the film as a distinctly American work rooted in the cultural anarchy of the 1970's as well as one packed with universal truths on the human condition, borders of time and place notwithstanding. The former packs the greatest punch in the third-act war between the main protagonists holed up in their shopping mall fortress and the military convoy that overruns them (bringing the zombie population flooding back in), stealthily evoking not simply the tensions between pacifist movements and more aggressive social orders of the time, but any scenario in which men turn on each other in the face of greater disorder (in other words, look at any historical timeline and pick your example of choice). The latter, then, is one implicit in the passive social hierarchies throughout Romero's screenplay, particularly amidst relationships and connective tissues so obvious they tend to remain hidden in plain view. In a prolonged television debate meant to inform viewers on how to handle the crisis at hand, a lone scientist stresses the importance of exterminating the dead "without emotion." How fitting, then, that the soldiers who underestimate the zombies – treating them more like disposable hunting targets worthy of ridicule than a lethal force to be reckoned with – are generally those who find themselves being torn limb from limb. 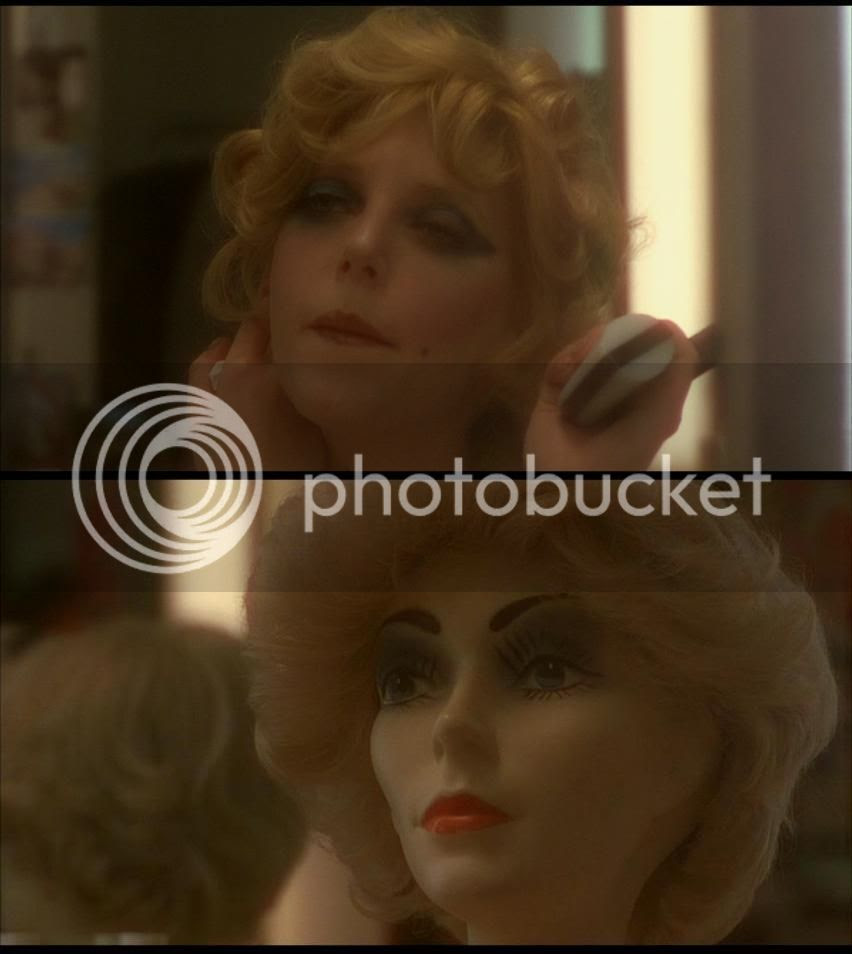 Romero's staging of these sequences is deliberately jarring in their sense of physical placement and spacial relationships, a quality that often renders his montages aggravating and underwhelming in the moment, only to improve immeasurably in a more contextualized retrospect. The opening sequence of a television station in disarray is a nearly unsurpassed example of cinematic crisis in the moment, while the subsequent raid on a zombie-infested apartment complex is by turns overwhelming in its chaos (two words: exploding head) and necessarily off-putting in its perpetual state of confusion. Romero's framing of social ills via his rotting, walking metaphors is ingenious but it's the more subtle, unspoken statements that register with the greatest force. Along with Peter's (Ken Foree) passive rip on America's mallrat culture, a personal favorite touch comes late in the film, after our characters have locked off their place of residence and cleared it of any danger, now lavishing themselves with unnecessary material goods galore while the world goes to shit beyond their decorated walls. Francine, decked out in makeup and channeling heroines of the silver screen with her sexy six-shooter, is briefly juxtaposed with an identically lavished mannequin (the moment may very well be her inner self-realization), plasticine and utterly devoid of anything human. This lies at the core of our character's moral reawakening and the reclamation of their identity apart from the material. In other words (to quote Marylin Manson), without the threat of death, there's no reason to live at all.