Although these eyes failed to see it upon its theatrical release two years ago, Land of the Dead may be the baddest genre film this side of Y2K (of the competition, only Red Eye and Terminator 3 come to mind). A stylistic departure from its more narratively protracted predecessors, this fourth entry in Romero's monolithic horror series is a ruthless, down-and-dirty morality tale, focusing less on the themes at hand than on the actions and reactions that implicitly define them. Romero propels his satire along with so cool and assured a sleight of hand that it's all too easy to mistake its efficiency for laziness, the visual signifiers and allegorical punches of the blink-and-you'll-miss-it breed. A revelatory second viewing notwithstanding, it remains the least of Romero's first four zombie films (with Diary of the Dead to follow later this year), although its potency in the footsteps of such brilliant predecessors calls due attention to its maker's tireless ability to reinvent himself. 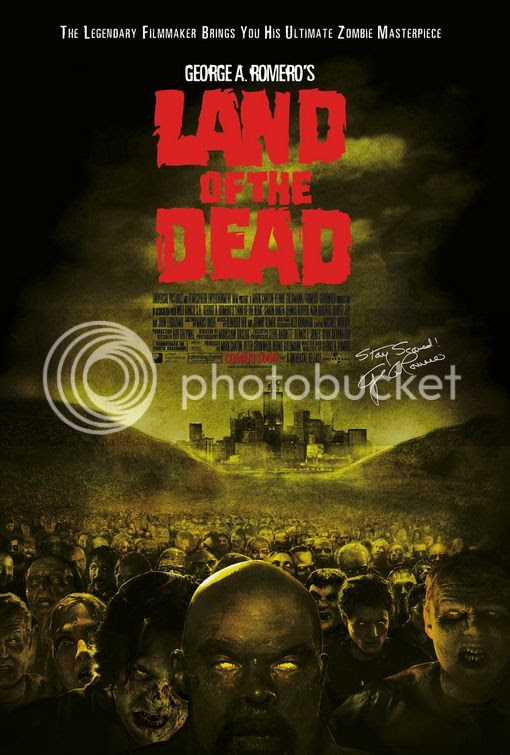 Deliberately continuing with the themes set out in Day of the Dead, Land begins with an eerie descent into our former civilization, where the risen dead have started to return to the patterns of their former lives, their reanimated brains reaching for those first steps of consciousness. For now, they're flesh-eaters of the mindless kind; scavenger teams raid the abandoned towns for goods while using fireworks (known here as "starflowers") to distract the zombies, shooting them down while they stare in awe at the sky, defenseless. Embittered at the seemingly unjust killing of his fellows (their craving for flesh being not a malicious act but a reaction to their basic instinct), the leading zombie (Eugene Clark, credited as "Big Daddy") begins to realize their capacity for more than simply lurching and munching; knives and guns make fine, if unsteady, weapons against the humans, while a risky plunge reveals the river separating them from the human city to be an obstacle easily overcome.

Meanwhile, the last throes of humanity have resumed their own battle of the classes. A tiny, makeshift city is safeguarded on two sides by water and on the third by electrified fence, seemingly solid defenses against the mindless undead outside their gates. Inside, the white and wealthy occupy Fiddler's Green, a luxurious skyscraper owned and operated by Kaufman (Dennis Hopper), who provides vices and distractions to the lower classes below whilst fending off the external zombie threat just enough so as to provide himself and his well-endowed customers with the luxuries they desire. For two years Cholo (John Leguizamo) has aided Kaufman in his dirty work in hopes of one day securing his own spot in the Green. When his efforts prove naught, however, Cholo revolts and steals Kaufman's armored battle vehicle, the Dead Reckoning, threatening to shell the Green lest he get his due reward. Kaufman, desperate to regain control over his exploited goods, commissions several other resistance fighters recently arrested for their commotion: their freedom in exchange for Dead Reckoning. 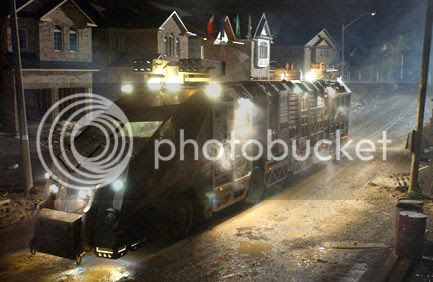 Like the best of genre films, Land of the Dead paints a resonant portrait of right and wrong without calling attention to its moral passes, here unifying (in spirit) the undead and the oppressed humans in their fight against The Man. Romero's nearly unparalleled skill in framing and editing is once again on display, the lurid underworld of the human city providing the film with a freakshow mise en scène reinforced by its typically outcast protagonists; Riley (Simon Baker), who conscience tires of cleaning Kaufman's dirty laundry, Slack (Asia Argento), whose disruptive behavior sees her nearly sacrificed to the undead in a sick circus game of chance, and Charlie (Robert Joy), an expert marksmen whose face was disfigured from a fire Riley rescued him from years ago. Similarly does Romero assign his undead recognizable personas, their obviousness offset by their tongue-in-cheek subversion.

When the zombies prove able to cross the river formerly guarding the city, the shit hits the fan like an employee riot during the Industrial revolution, albeit without strikebreakers on hand to put the workers back into their subjugated places of obedience. As the undead storm the Green to eat the rich, the less pampered of the human survivors prove more capable of handling themselves than those who formerly possessed the means of production. The rich flee into their dead-end world of excess as the proletarians overturn the bourgeois in a Marxian spectacle of revolution. Here, Romero's deconstruction of capitalist society comes full circle; with the system now returned to the hands of its rightful owners, the need for distractions returns to zero. The undead have conquered their true enemy and found their own place of peace at last, and, firing off the last of their starflowers, the now unshackled humans head north to uninfected territory.